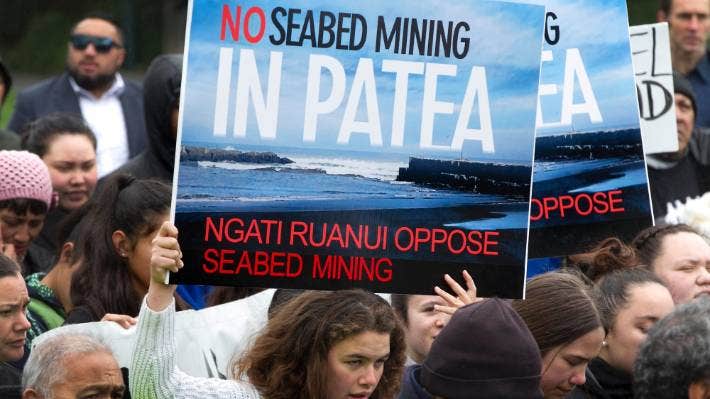 Legislation that would ban seabed mining is being launched by Te Paati Māori.

Co-leader Debbie Ngarewa-Packer called on all MPs and parties to support her first Member’s Bill, the Prohibition on Seabed Mining Legislation Amendment Bill, when she announced it on social media.

Ngarewa-Packer has led a fight for more than six years against a bid by Trans Tasman Resources Ltd to mine the seabed off the South Taranaki coast, in her role as Kaiarataki of Te Runanga o Ngāti Ruanui.

“Having helped to lead the campaign against seabed mining with my iwi, both in the courts and on the streets, I’ve always said that this would be one of my top priorities as a Te Paati Māori MP,” she said in a post on Tuesday morning.

“Deep sea mining is a risky, new mining practice. Mining up to 50 million tonnes of ironsand every year for 35 years would be an absolute environmental disaster. It would destroy entire ecosystems and damage our coastlines for generations to come.

“There is a growing global movement to end seabed mining – this would be a win-win opportunity for the Government to support our people and protect our moana for future generations.”

Her bill aims to put in place a nationwide ban on seabed mining consents within New Zealand’s Exclusive Economic Zone (EEZ) and coastal waters governed under the Resource Management Act.