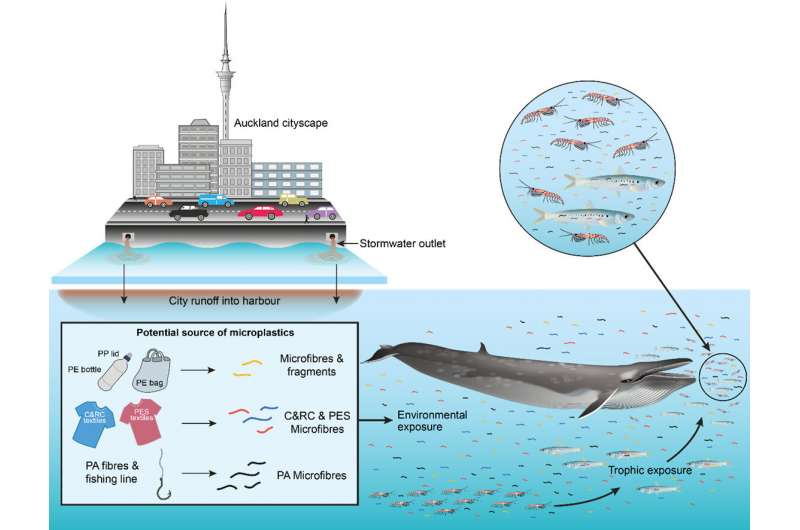 The researchers, in collaboration with whale watch company Auckland Whale and Dolphin Safari, collected whale scat from Bryde's and sei whales in the Hauraki Gulf near New Zealand's largest city of Auckland.

Microplastics have been found in every marine environmentstudied to date, but how many microplastics animals are exposed to each day has been hard to estimate.

Marine predators such as whales, manta rays and whale sharks that filter feed, or strain food from large amounts of seawater, provide a way to understand exposure to microplastics from the environment and from food.

"Essentially, whales are continuously sampling both their environment and their prey when they feed," said study author Laura Zantis.

"We wanted to understand how many microplastics they consume each day and whether those microplastics were in the whales' food or from water swallowed during feeding."

The research team used DNA to discover that the whales were mainly eating small zooplankton such as krill.

Through calculations of how much prey whales consumed per mouthful of krill, the study estimates the whales consume about 25,000 microplastics every time they capture prey.

"Most of those 25,000 microplastics in each mouthful come from prey, with only about one in 1,000 coming from the water, and that shows how microplastics can be concentrated up the food chain," said Dr. Emma Carroll, senior author in the study.

Using information from this work, the researchers estimated that the whales consume over 100 mouthfuls of food per day.

Putting it all together, the study estimates that the whales consume around three million microplastics per day.

"Future studies on the risk of exposure to microplastics need to understand the role of food as well as water sampling to determine levels of these pollutants," Ms Zantis said.

"Our findings provide a new way of measuring microplastic pollution in all filter feeding animals to better understand this global threat."

The research team included Dr. Sarah Nelms, of the Centre for Ecology and Conservation on Exeter's Penryn Campus in Cornwall.

The paper, published in the journal Science of the Total Environment, is titled "Assessing microplastic exposure of large marine filter-feeders."