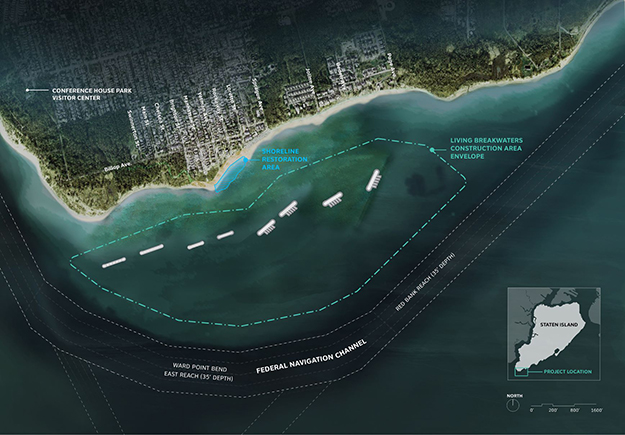 The built environment not only includes buildings and concrete infrastructure, but also landscapes, which are increasingly critical for adapting to climate change. Landscape architects are responsible for planning and designing these nature-based solutions that bring maximum benefits to communities.

As part of Climate Week NYC, one of the world’s largest climate events, the New York Chapter of ASLA has organized a dynamic virtual event: Designing Better Shorelines—with Nature.

The two projects in Staten Island grew out of New York City’s response to Superstorm Sandy, which struck in October 2012. The storm was a wake-up call for the city to better prepare for the impacts of climate change.

Sandy’s impact is understood to have been intensified by climate change — higher ocean temperatures and sea levels may have contributed to the heavy rainfall and the stronger storm surge, which inundated parts of Staten Island and led to the death of several residents and billions of dollars in damage.

Living Breakwaters is currently being constructed in the Raritan Bay. The Tottenville Shoreline Protection Project will be built on the shore itself. The landscape architects leading these projects will explain why we need to re-imagine our coastlines for climate change and future superstorms and how to do it.