Northeast
“Effie,” the mummified remains of a baby woolly mammoth found in Alaska in 1948 is on display at the American Museum of Natural History, Friday, Jan. 13, 2023, in New York. The 21,000-year-old specimen is a rare natural mummy, complete with skin, muscles, and other soft tissue that were preserved centuries ago within a frigid layer of moisture-blocking permafrost. (Mary Altaffer/AP) 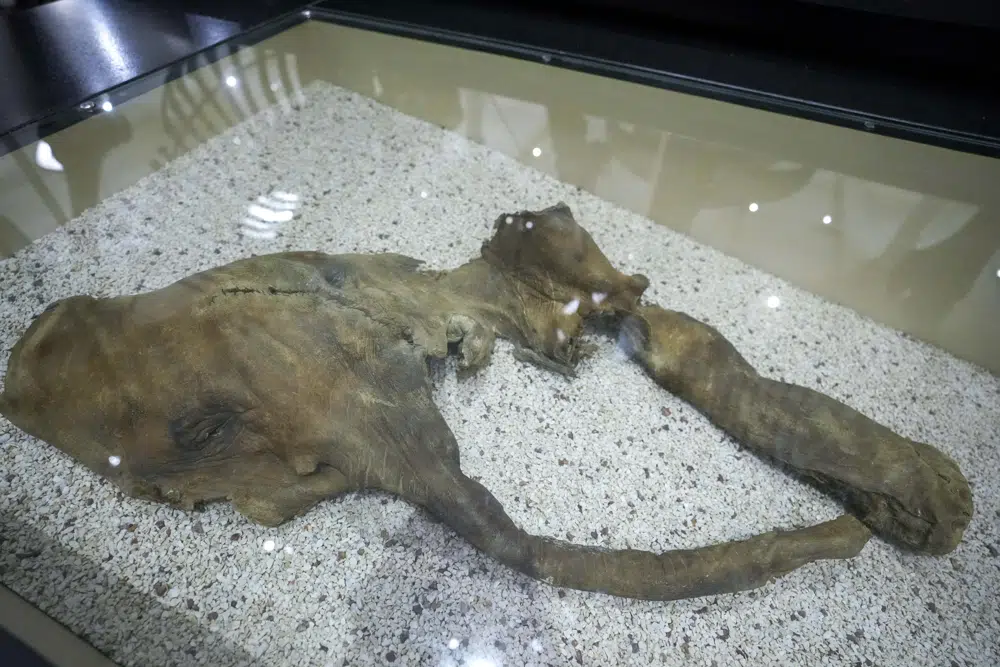 Ask people what you might find buried in the muck at the bottom of New York City’s East River and they’d likely say “mob boss” before thinking of mammoth bones.

But several groups of treasure hunters have taken to the waterway in recent weeks after hearing a guest on comedian Joe Rogan’s podcast claim a boxcar’s worth of potentially valuable prehistoric mammoth bones was dumped in the river in the 1940s.

Despite a lack of evidence to back up the story, treasure seekers using boats, diving apparatuses and technology like remote-operated cameras have gone searching, in hopes the murky waters are hiding woolly mammoth tusks.

“I think the chances are just as good as the lottery. And people buy those tickets every day,” said Don Gann, 35, of North Arlington, New Jersey, a commercial diver who’s been out on the water since early last week with his brother and two workers.

It all started when John Reeves, an Alaskan gold miner with a passion for fossils, came onto “The Joe Rogan Experience” for an episode that aired Dec. 30 to talk about his land, where he has personally uncovered numerous age-old bones and tusks. In the first half of the 20th century, under previous ownership, digging for gold unearthed a trove of prehistoric mammal remains.

Some of that material was brought to New York City decades ago to be handed over to the American Museum of Natural History. Reeves cited a draft of a report put together by three men, including one who worked at the museum, that included a reference to some fossils and bones deemed unsuitable for the museum being dumped into the river.

“I’m going to start a bone rush,” Reeves told Rogan, before reading from the draft and giving out a location: East River Drive, which is now known as the FDR Drive, at around 65th Street.

“We’ll see if anybody out there’s got a sense of adventure,” he said, later adding, “Let me tell you something about mammoth bones, mammoth tusks – they’re extremely valuable.”

After the episode aired, the American Museum of Natural History threw water as cold as the East River on the tale.

“We do not have any record of the disposal of these fossils in the East River, nor have we been able to find any record of this report in the museum’s archives or other scientific sources,” it said in a statement.

When reached by The Associated Press via telephone, Reeves refused to talk and instead told a reporter to read the pages of the draft he had posted on social media before hanging up. He didn’t answer other calls and emails.