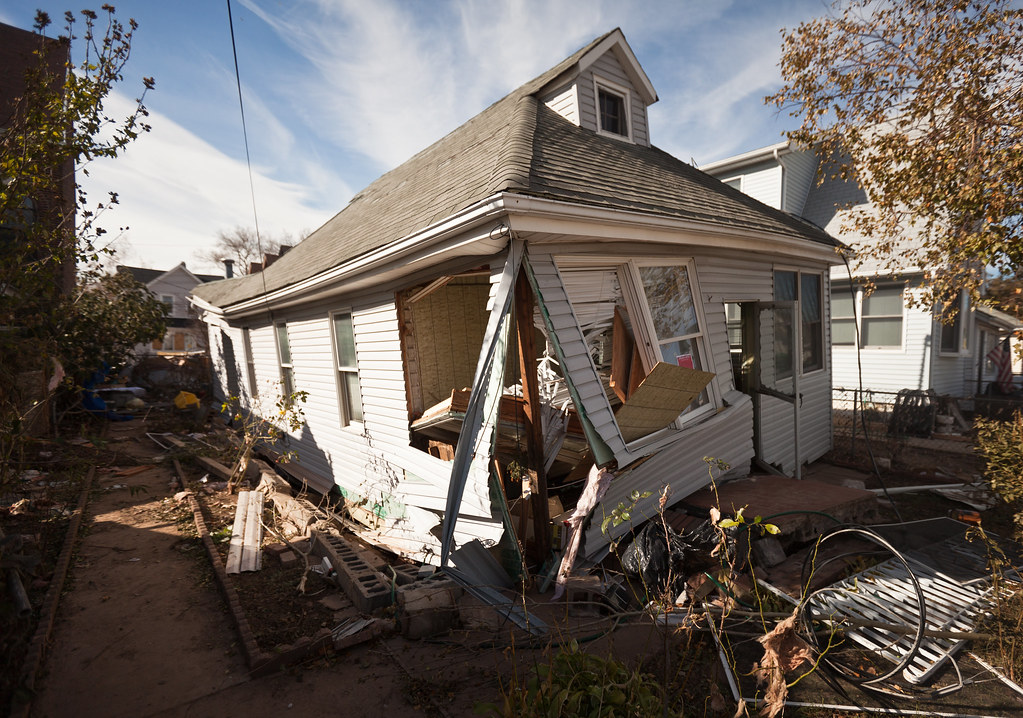 NY - ‘They Lied to All of Us’: Ten Years After Hurricane Sandy, Construction Begins on Staten Island’s Promised Wetland

Staten Island residents who sold their homes to the state as part of one of the country’s first major “managed retreats” were promised the land would be returned to nature. Instead, part of it is being turned into a soccer complex.

Just before 7 pm, Oakwood Beach, a quiet bungalowed neighborhood on the east shore of Staten Island, was shattered by Hurricane Sandy. Houses, entirely uprooted, floated down streets submerged under 12-foot waves of stormwater. In half an hour, the area was unrecognizable. Three people died, including a father and son, found in a flooded basement, wrapped in each other’s arms.

“You had cars floating away and electrical wires flashing in the water,” Rosita remembers. Yelling and screaming filled the houses around her as she swam through the darkness into a neighbor’s attic to wait out the worst. Her husband was trapped in their home; neither would know the other survived until the next morning.

In the wake of the largest Atlantic storm ever recorded, Oakwood came together: Relatives arrived to clean houses; donated shoes, mops, and disinfectant were trucked in; local restaurants served free meals in the streets.

A year passed. Then, in 2013, Oakwood came together again, this time to tear itself apart.

As part of the US’s first ever urban “managed retreat,” locals applied for the New York state Governor’s Office of Storm Recovery (GOSR) to buy their homes at pre-storm value. The community would have a chance to scatter inland, away from future floods, and Oakwood Beach would never be the same.

Houses were bulldozed and their foundations reseeded, all with the promise that the land would never again be developed, but would instead return to nature, serving as a buffer for the island against future storms.

Now that promise has been broken by plans that urban planning and climate law experts say may break state law. Ten years have passed since Hurricane Sandy, and the state has resold more than half of the lots it bought in Oakwood — mostly, in 2019, to a sports league with plans to develop six playing fields and what their representatives describe as a “stadium,” with bleachers and a “clubhouse,” on the streets between the lots.

In order to limit flooding on their fields, the Staten Island Youth Soccer League (SIYSL) also intends to lay concrete foundations under certain areas, redirecting water to the streets and land surrounding them.

GOSR maintains that Oakwood has successfully been returned to nature and become a “coastal buffer” against storms, but would not comment on the league’s plans. The league argues that local opponents are not-in-my-backyard grumblers who would resent any changes to their neighborhood.

“The problem we have is that these owners have become accustomed to having all of this well groomed, open grass area for them to sit outside and have a cup of coffee,” said Fred Cipriani, the league’s treasurer. “You know, they don’t want 2,000 kids running around here on a Saturday.”

Construction began earlier this month. The league will celebrate a breaking ground ceremony, complete with a DJ and costume competition, today, on the 29th: Sandy’s 10th anniversary.