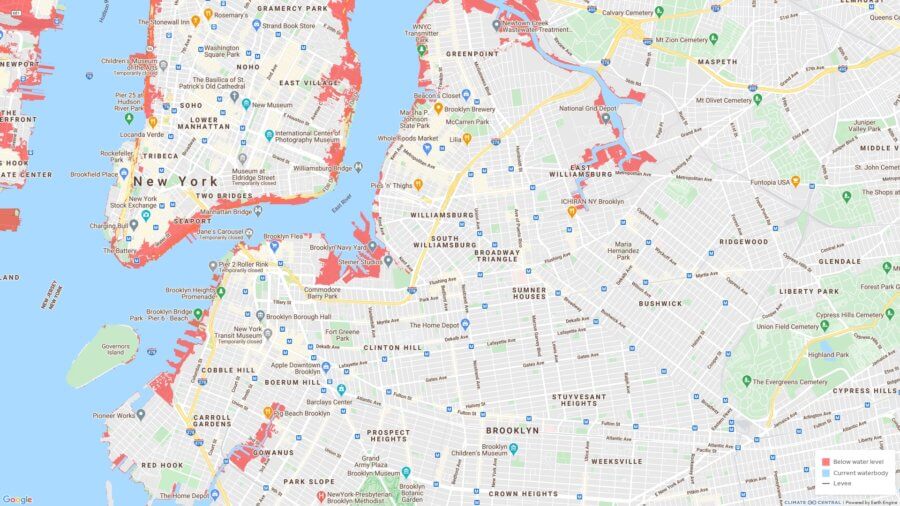 NY - Swaths of Brooklyn Coastline to Be Flooded Annually by 2050: Study

Miles of low-lying neighborhoods along Brooklyn’s coast will suffer annual floods by 2050 because of rising sea levels, scientists predict in a new interactive map.

Stretches of Coney Island, Brighton Beach, Gravesend, Gowanus, Red Hook, Marine Park, Canarsie, and all of northern Brooklyn’s coastline will be flooded at least once a year as storm surges and hurricanes become more frequent because of global warming, the map shows.

The map — which was released by Climate Central on Dec. 1 as part of a study published in the science journal Environmental Research Letters — allows users to adjust the year, the amount of luck, and pessimism of the source material to view a range of sea level predictions from 2030 to 2100.

Some of the worst flooding is projected to take place in Greenpoint along McGuiness Boulevard and on Greenpoint Avenue down to Newel Street, as well as on the streets within one block of the waterfront. East Williamsburg’s waterfront around the edge of Newtown Creek will also be badly hit, as will the Brooklyn Navy Yard and the blocks along the Gowanus Canal, according to the study.

In southern Brooklyn, Coney Island and Brighton Beach will see the most flooding on Neptune Avenue between W. 31st and W. 19th streets and on Shore Boulevard between West End Avenue and Oxford Street.