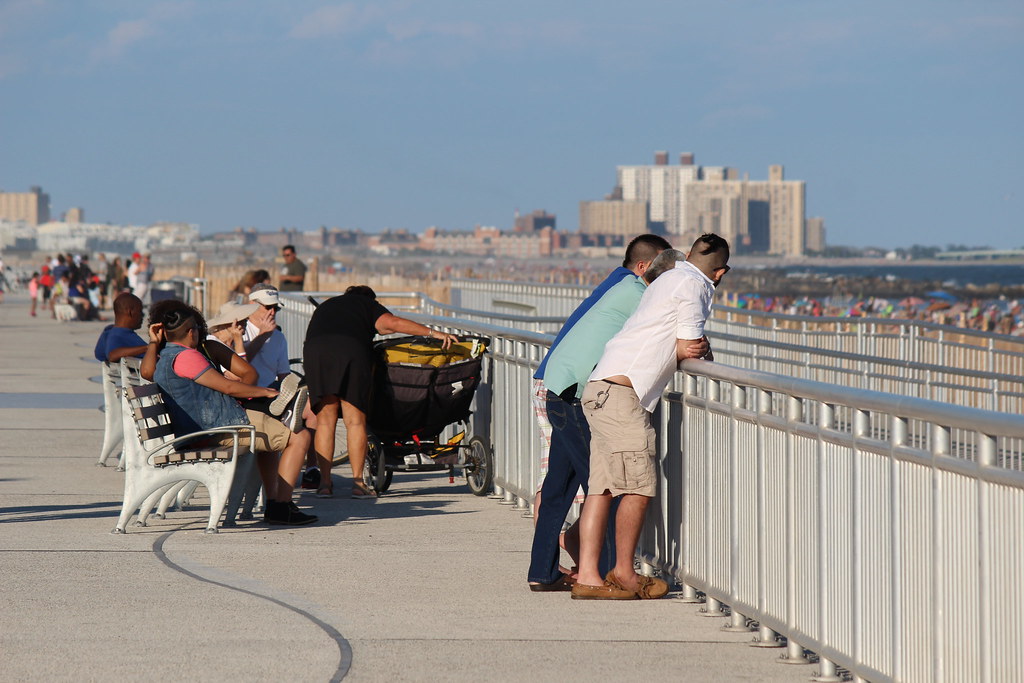 NY - Reflections on a boardwalk: Rockaway Beach 10 years after Sandy

It was one of the last warm summer nights, where people try to squeeze every last drop out of the season as it crashes to its close; and the Rockaway Boardwalk was alive with cyclists, roller skaters, musicians, and dance parties.

Frenzied pockets of activity around the concession stands punctuated long stretches of quiet — where the only sounds were the ocean breeze and the soft lapping of waves at the shore.

It’s hard to imagine a time when the boardwalk didn't define this 5.5 mile stretch of coastline. It was first constructed in the 1920s – and remains one of the longest boardwalks in the country.

But when Hurricane Sandy battered New York City 10 years ago, it not only damaged hundreds of homes on the peninsula – it also destroyed the beloved boardwalk. A decade after the storm, and six years after its full reconstruction, the boardwalk is both the heart of the Rockaway community and a beacon for visitors, as well as a bittersweet memorial of an impossibly painful time in the peninsula’s history.

“We have a beautiful new boardwalk and a lot of gorgeous new parks, and the community has definitely expanded, but I think anyone who is here during that time knows that it came at a really high cost and there was a lot of suffering,” said Bridget Klapinski, is a community organizer with the Rockaway Beach Civic Association. “It will always be a little bit bittersweet.”

Though the boardwalk had been around for decades before the storm, Sandy revealed a key design flaw: it wasn’t anchored to the concrete pilings that supported it. So when 10 feet of storm surge crashed across the peninsula, it simply lifted the boardwalk up and took it away. Some chunks of boardwalk were lost forever in the depths of the Atlantic Ocean, others came crashing down into the flooded streets of the peninsula.

“We saw sections of boardwalk on top of houses. It was like Godzilla came through,” said Jonathan Gasko, the longtime district manager of the local community board.

The boardwalk’s reconstruction generated fierce debate. Everyone wanted it rebuilt, but how it would be constructed became a source of contention.

“We wanted them to come back with wood cause that's what a boardwalk is,” Gasko said.

In the end, former Mayor Michael Bloomberg’s administration said it would be rebuilt with concrete, which the administration argued was more sustainable and more durable than tropical hardwood.

“The way they really sold it to the community was that it can be a barrier to keep the Atlantic Ocean from coming in,” Gasko said.

Reconstruction took four years. Maribel Araujo, owner of boardwalk arepa joint Caracas, reopened her eatery in the summer after Sandy. But for three summers, her stand was on more of an island than a boardwalk — hers was the last concession area to be reconnected in 2016. When that finally happened, it felt like a homecoming, she said.