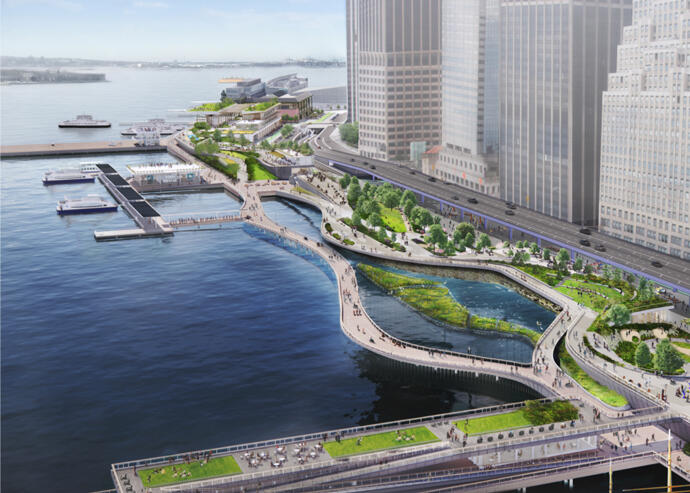 A new proposal from the city’s economic and climate leaders calls for a two-level, mile-long esplanade that would protect 140 acres of low-lying land in FiDi and the Seaport from rising seas and storm surges, the Commercial Observer reported. If built, the project would extend the shoreline by 110 feet into the East River and create open public space along the coast.

The lower level of the esplanade would sit just three to five feet above the river, forming a direct path between the Battery and the Brooklyn Bridge and protecting against rising seas, according to the plan from the New York City Economic Development Corporation and the Mayor’s Office of Climate Resiliency. The upper level, a 13- to 15-foot storm wall, would thwart surges like those seen during Superstorm Sandy in 2012.

“There’s no doubt climate change is here,” said Rachel Loeb, the president and CEO of the EDC, in a statement. “If we do not take action now, residents, businesses and critical infrastructure are put in jeopardy.”

The unfunded waterfront project would cost between $5 billion and $7 billion, but would prevent up to $1 billion in yearly damages by the time it’s finished in the 2050s, according to the authors of the plan. Unlike a similar idea called “Seaport City” pitched by the Bloomberg administration, the plan unveiled Wednesday includes virtually no commercial development. A press release mentioned that cafes could be part of it.

Just one storm left unmitigated can prove enormously expensive. After Sandy, the Federal Emergency Management Agency sent more than $14 billion to governments and nonprofits involved in recovery work, and another $1 billion in individual assistance. The city anticipates more than $20 billion in damages from flooding between 2021 and 2100 if no action is taken.