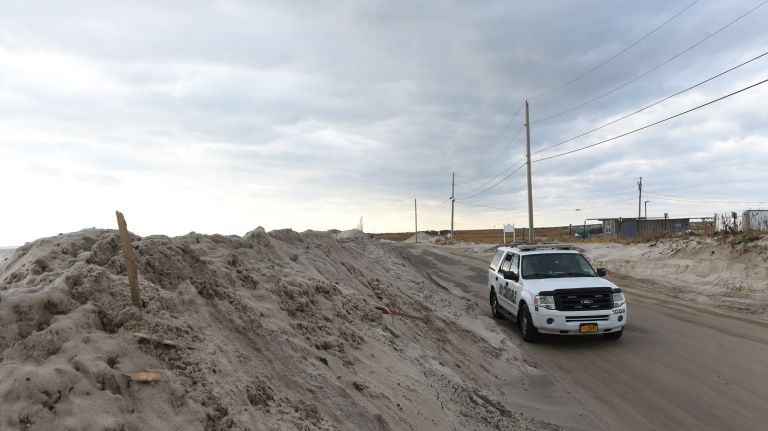 Southampton Town officials are calling for immediate emergency assistance for Dune Road as a man-made sand berm placed in front of the Shinnecock Commercial Fishing Dock by Suffolk County has almost all been washed away.

Saturday’s high tide caused a washover of the barrier island roadway, one of several to occur since an Oct. 10 nor’easter first overtook the dune there.

The latest washover underscores the need to immediately prevent a breach in the area, which protects the second-largest fishing port in New York, Southampton Town Supervisor Jay Schneiderman said. The county began dredging 90,000 cubic yards of sand in November, but Schneiderman estimated about 75% of it is gone.

“We’re not going to get through this winter the way it is,” Schneiderman said. “We need immediate emergency assistance.”

The area is vulnerable to erosion because the jetties along the Shinnecock Inlet disrupt the natural flow of sand.

The road was closed through Saturday night until town highway crews scooped the sand out of the road to rebuild the berm. A harbor seal traveled through the open section of dune and became trapped near the dock after it was closed off, Schneiderman said. Representatives from the Riverhead Foundation rescued the animal, but said it appeared healthy, he said.