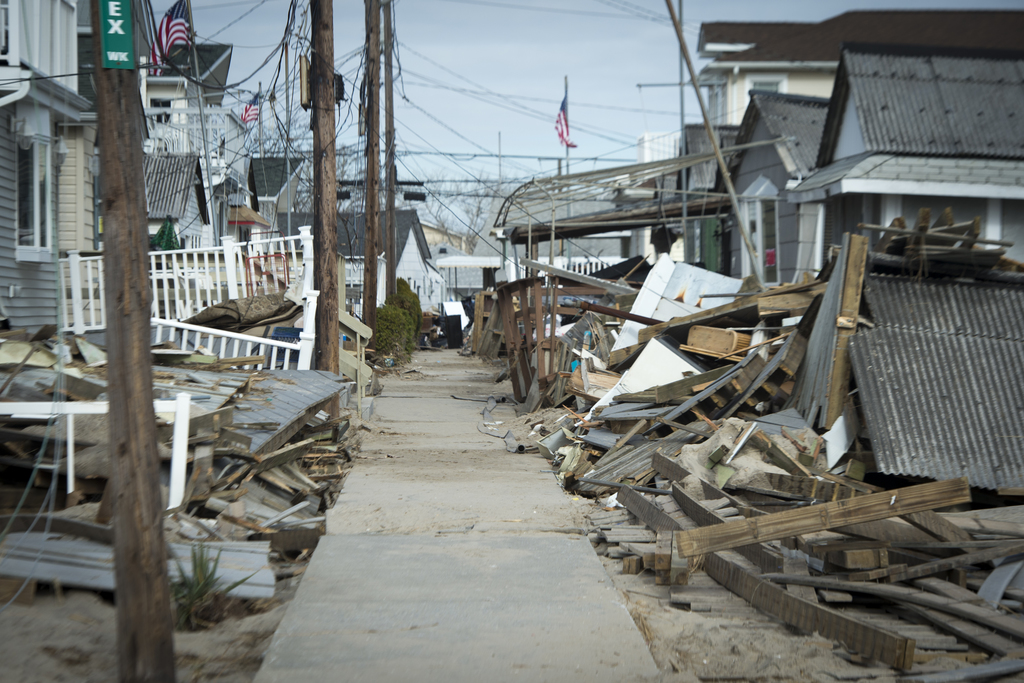 The city wants to use its public housing developments to soak up extreme rain.

Almost every time it rains in New York City, the grounds of the South Jamaica Houses start to flood. As the storm drain system overflows, water collects across the sprawling public housing development in southeast Queens. Before long, floodwater pools up on the basketball court and in the yard behind the senior center. If it rains for more than a few hours, the water starts to slosh over streets and courtyards. These aren’t the monumental floods that make national headlines, but they make basic mobility a challenge for the complex’s roughly 3,000 residents. Sometimes the water doesn’t drain for days or weeks.

“It happens all the time,” said William Biggs, 66, who has lived in the development for 35 years. He gestured at the basketball court, which is cracked and eroded in places. “It pools all the way through the court, all the way back toward the buildings, all along that wall there. And the reason is that we don’t have any drainage. The storm drains don’t work.”

“If you put some fish in there, you could go fishing,” added Biggs’ friend Tommy Foddrell, who has lived in the development for around two decades.

That decrepit basketball court will soon become a centerpiece of New York City’s efforts to adapt to the severe rainfall caused by climate change. In the years to come, construction crews will sink the court several feet lower into the ground and add tiers of benches on either side. During major rainstorms, the sunken stadium will act as an impromptu reservoir for water that would otherwise flood the development.

The project will be able to hold 200,000 gallons of water before it overflows, and it will release that water into the sewer system slowly through a series of underground pipes, preventing the system from backing up as it does today. Just down the block, work crews will carve out another seating area arranged around a central flower garden. That project will hold an additional 100,000 gallons of water.

In the aftermath of Superstorm Sandy, which struck New York City 10 years ago this month, the city spent billions of dollars to strengthen its coastline against future hurricanes. Sandy had slammed into the city’s southern shoreline with 14 feet of storm surge, inundating coastal neighborhoods in Queens and Staten Island. The city’s biggest climate adaptation goal in the years that followed was to make sure that these coastal neighborhoods were prepared for the next storm surge event.

But the next Sandy turned out to be a very different kind of storm. In September of last year, the remnants of Hurricane Ida dumped almost 10 inches of rain on New York City, including three inches in a single hour. Rather than inundating the city’s shoreline, the storm dumped heaps of rain on inland neighborhoods, overwhelming neighborhood sewer systems and filling up streets with water. The flooding killed 13 people, most of whom lived in below-ground apartments that didn’t typically see flooding.

Now the city is trying to retool its climate plans to be prepared for the intensified rainfall of the future. This time, the New York City Housing Authority, or NYCHA, is at the heart of the effort. The South Jamaica Houses project is the first in a series of initiatives that will turn NYCHA developments into giant sponges, using the unique architecture of public housing to capture rainfall from so-called “cloudburst” events and prevent floods like those caused by Ida. Three of these projects are already in the works in three different boroughs, supported by a hodgepodge of federal money.