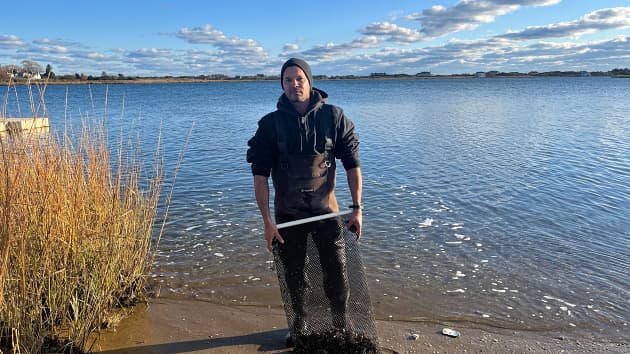 The Shinnecock Indian Nation is fighting to save what’s left of its land as climate change prompts sea levels to rise and eat away the shoreline in Long Island, New York. European settlers, and later the U.S. government, for centuries have forcefully relocated Indigenous tribes onto marginal lands more vulnerable to climate hazards. “This is the only place we have to remain. This is our homeland,” said Shavonne Smith, director of the tribe’s environmental department.

SOUTHAMPTON, N.Y. — The Shinnecock Indian Nation once had seasonal villages that stretched across the eastern end of Long Island. But after centuries of land loss and forced relocation, more than 600 tribe members now live on a shrinking 1.5 square mile peninsula.

The Shinnecock, whose name means the “people of the stony shore,” are fighting to save what’s left of their land as climate change prompts sea levels to rise and eat away the shoreline. The tribe has used nature to restore the land, from building oyster reefs to lining up boulders on the shoreline to blunt the energy of the waves of Shinnecock Bay.

“This is the only place we have to remain. This is our homeland,” said Shavonne Smith, director of the tribe’s environmental department, walking near a scared burial ground that’s at risk of flooding. “And this is all that’s left of it.”

Since the mid-19th century, the Shinnecock have had a reservation of about 800 acres — a fraction of their traditional lands. Sea level rise on the Shinnecock lands is projected to reach between 2.1 to 4.4 feet by the end of the century. Nearly half of the peninsula is forecast to be inundated by floods if a 100-year storm occurs in 2050, when sea levels are projected to be 1.5 feet higher than today, according to the tribe’s climate adaptation report.

“The water levels are getting higher. I’ve seen it,” said Shinnecock aquaculture manager Mila McKey, who grows oysters and restores clam populations in a creek on the tribe’s land. “Everyone’s affected by it.”

Across the shoreline from the reservation, rising sea levels also plague the affluent beachfront communities of Southampton, where some homeowners have resorted to building sea walls that temporarily hold back water while causing the beach to wash away. The federal government is set to spend billions of dollars shoring up the coastline and protecting real estate in areas like Fire Island, Southampton and East Hampton.

The Shinnecock’s battle to save their land from rising seas and erosion reflects a broader problem of racial inequity and environmental justice in the U.S., where historically oppressed and disenfranchised indigenous groups have been left more exposed to the effects of climate change. As global temperatures rise and climate disasters grow more frequent and intense, marginalized groups are under greater pressure to fight and adapt to climate change.