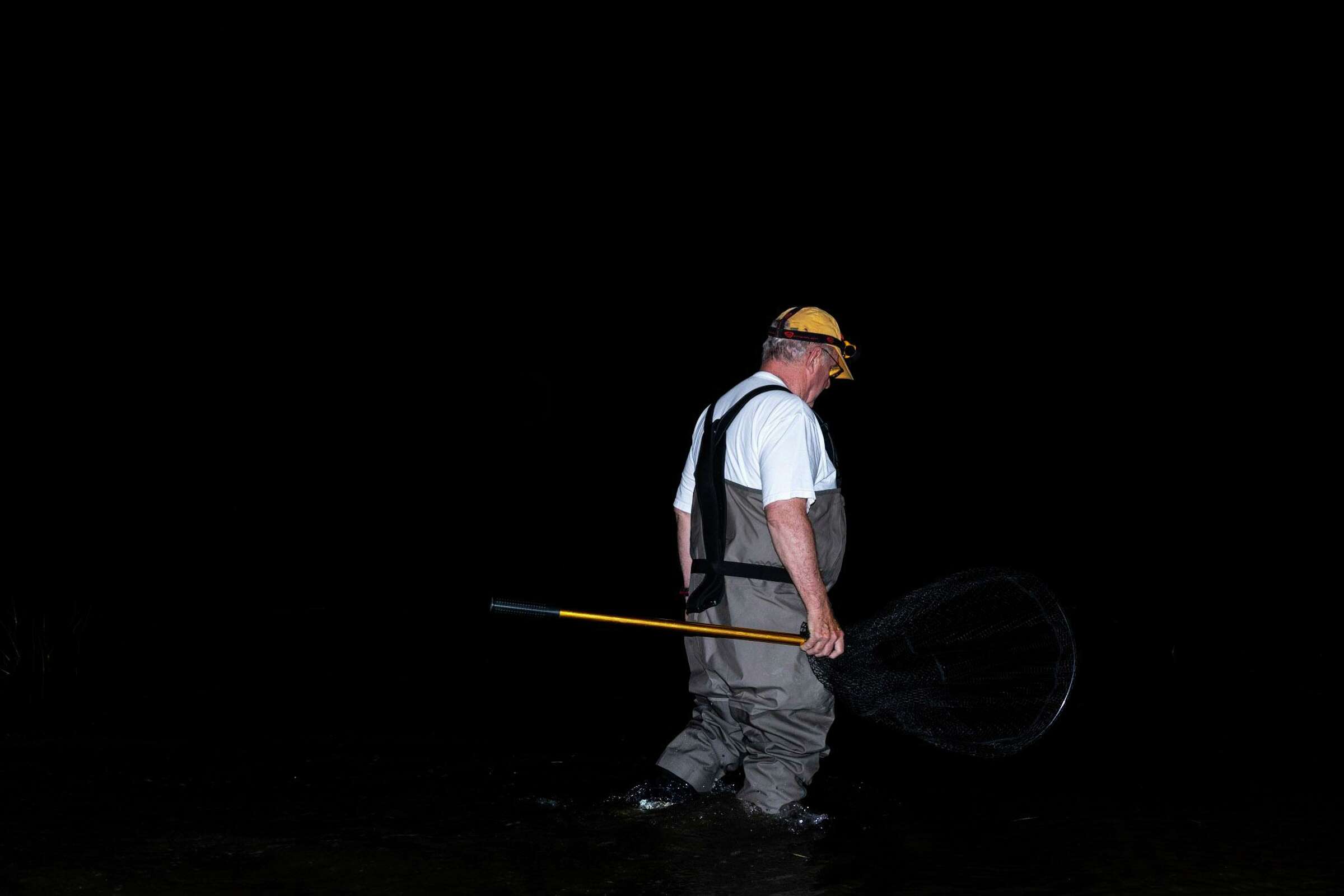 CALF PASTURE BEACH — Drawn by the full moon rising over the Norwalk Islands on Tuesday night, a swarm 450 million years in the making lurked just below the waves lapping onto the sandy beach.

Joe Schnierlein, a former marine biologist and high school teacher, swooped into the shin-deep water and pulled up the armored shell of a female horseshoe crab, one of several hundred of the spider-like animals that chose this night to come ashore and lay their eggs to spawn the next generation in Long Island Sound.

The full moon and its associated high tide — which provides good cover for the horseshoe crabs to lay their eggs high up on the beach — also attracted about 40 human volunteers, including Schnierlein, who have come to place tags on the animals as they spawn, part of a scientific monitoring program that has attempted to track populations of these ancient crabs in the Sound for more than two decades.

Led by staff from the nearby Maritime Aquarium, volunteers like Schnierlein have been coming to this particular spot on the beach for years, where they say favorable tides and clear nights can help them find and tag upwards of a hundred crabs in about an hour. On other occasions, however, it can be a struggle to find even a few dozen crabs.

“There’s been some good years, some bad years,” Schnierlein said. “Is it because of the weather? You don’t know.”

Across Long Island Sound, researchers who monitor the results of these and other tagging efforts say that horseshoe crabs are on the decline, driven by a combination of habitat loss, pollution and commercial fishing that is threatening the role this species has played in the environment since before the time of the dinosaurs.

The Atlantic States Marine Fisheries Commission reported in 2019 that stocks of horseshoe crabs in the New York region, which includes Long Island Sound, were in “poor” condition, after a series of surveys showed their numbers declining since the late 1990s.

Jennifer Mattei, a biology professor at Sacred Heart University who has studied horseshoe crab populations for years as part of Project Limulus, said those findings were in contrast to more abundant populations farther south in places such as Delaware Bay, where millions of eggs laid by the crabs serve as a vital smörgåsbord for migrating birds such as the endangered red knot, which flock to the bay in the thousands on their way to nesting grounds in the Arctic.

While the horseshoe crabs in the Sound are not in danger of going away completely, Mattei said that their numbers are so low that they cannot support the numbers of birds and other wildlife that they do elsewhere in their range.