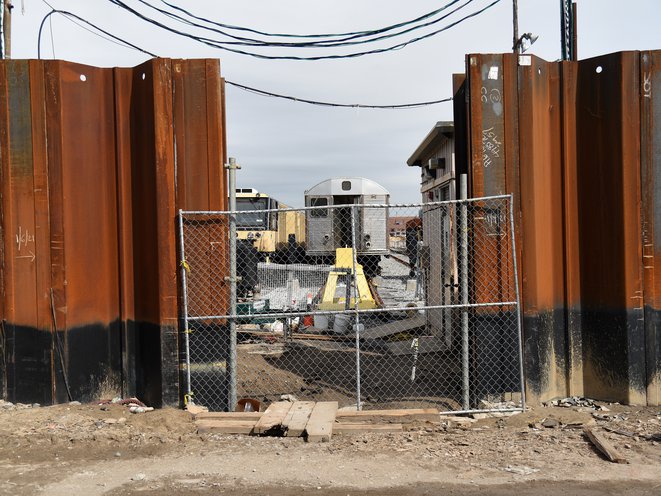 New York City is surrounded by water, with over 130 neighborhoods situated along 520 miles of coastline.

Its populace of 8.3 million residents—the largest metro area in the United States—relies heavily on its vast transportation system. And as sea levels continue to rise, the future of both the city and its transportation network are in jeopardy.

Coney Island is an ideal place to view this present-day peril. Start on a dead-end stretch of Shore Parkway. The road here floods with even a light rain, covering the broken concrete in thick mud. On one side of the street is Coney Island Creek, where Hurricane Sandy’s surge pushed ashore and inundated this Brooklyn neighborhood in 2012.

Coney Island Yard Complex, one of the largest rapid transit train yards in the world, sits on the other side. This 74-acre facility was flooded with 27 million gallons of seawater during the hurricane, leaving the train yard crippled.

“Coinciding with the high tide, the storm washed in water and debris which quickly inundated the tracks, switches, motors and signal equipment. In Sandy's wake, the yard more closely resembled a lake than a storage area for subway trains,” New York’s Metropolitan Transportation Authority (MTA) wrote in a 2013 synopsis. “The storm left the track-switching operation at the world's largest rapid transit maintenance and storage facility unable to be controlled remotely.”

Since 2018, the MTA has been working on a project to protect the Coney Island Yard from future storms and sea level rise. The authority built 21,000 feet of new drainage, nine flood gates, two pumping stations and a 4,280-foot-long bridge above the yard, elevating third-rail power lines and communications cables out of the flood zone. They are also erecting a 12,000-foot-long floodwall around the perimeter of the yard.