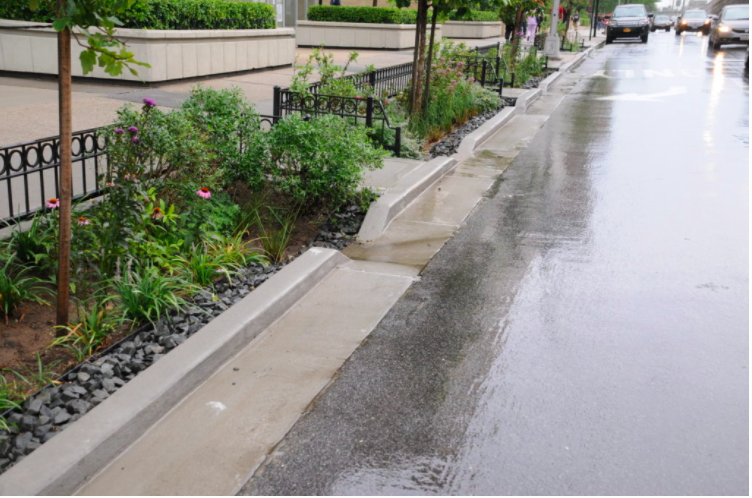 On Friday, Gov. Kathy Hochul announced the completion of a $13 million project to install green infrastructure improvements near Jamaica Bay, in both Brooklyn and Queens.

In Canarsie, 12 rain gardens have been created in the area between 88th Street to Rockaway Parkway, from Avenue J to Avenue K, at a cost of $353,788.

In Gravesend/Bensonhurst, 39 rain gardens were installed in the area between West 7th Street to Ocean Parkway, from Avenue P to Avenue R and Highland Avenue, at a cost of $1,149.

In Midwood/Flatlands, seven rain gardens were installed in the area between Nostrand and Flatbush Avenues, from a path connecting Kings Highway, Avenue N and Flatlands Avenue south to Avenue P, at cost of $206,376.

Rain gardens, which include filling an area with soil and in- stalling plantings, can be built into the roadway curb line to divert stormwater flow before it can reach the municipal sewer system. Rainwater is captured, feeds the plantings like grass, shrubs, or trees, and infiltrates into the soil. They can also be in- stalled in yards to capture stormwater rather than overwhelming municipal sewer infrastructure.

During Hurricane Irene and Superstorm Sandy, nearby communities in both Brooklyn and Queens experienced heavy rainfall and storm surge which caused substantial flooding along roads. Since then, FEMA significantly expanded flood mapping within these areas. “Water acts as a natural border for these communities, whether it’s Jamaica Bay, Fresh Creek or the Atlantic Ocean,” the Governor’s Office said.

“We remain laser-focused on funding projects that support our nation-leading climate goals,” Hochul said. “This $13 million green infrastructure project in Jamaica Bay will reduce pollution, mitigate flooding, and enhance resiliency in the face of stronger storms. New York will continue to implement forward-thinking policies and make strategic investments to combat the effects of climate change.”