Northeast
Congressman Hakeem Jeffries presents Maria Garrett with a giant check for $800,000 for construction of a tidal gate for a sewer flowing into Fresh Creek on May 9, 2022. Photo by Ben Brachfeld 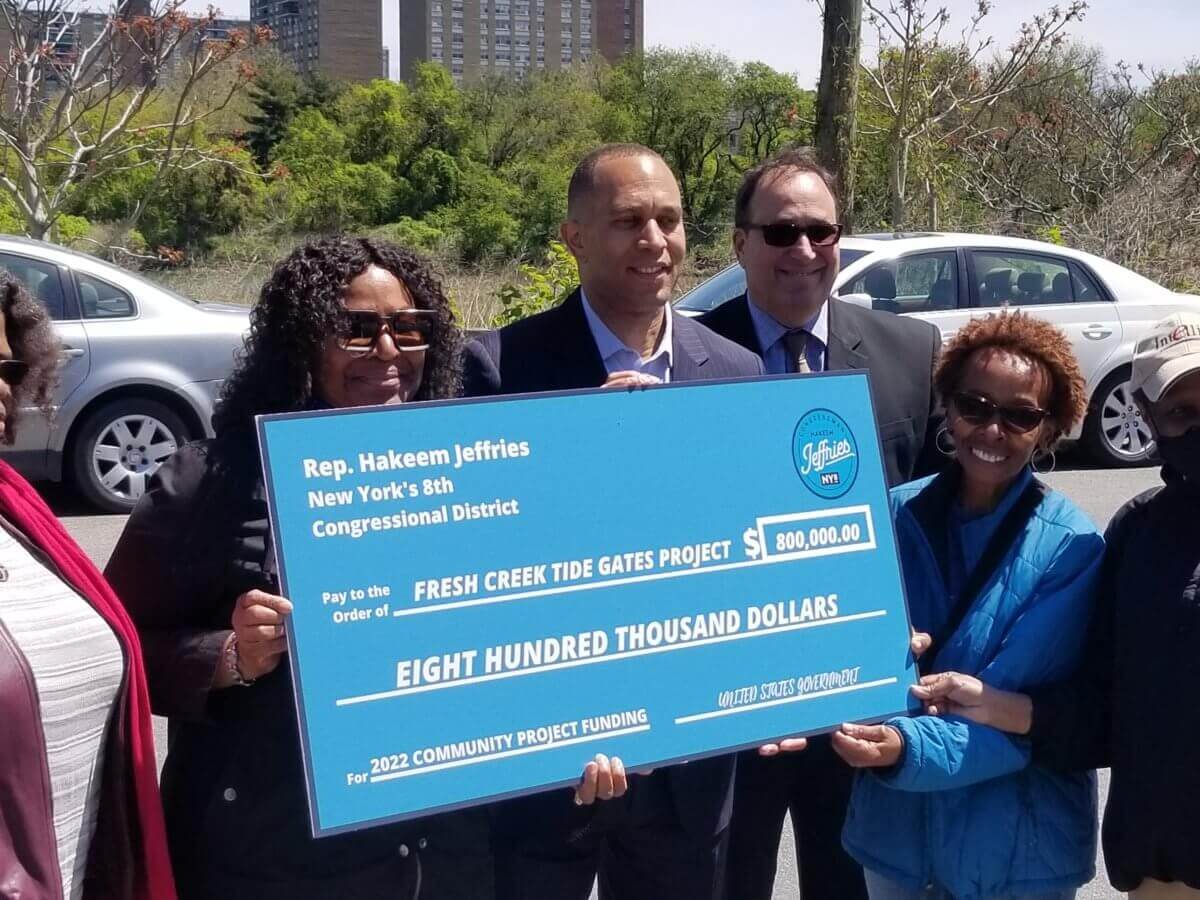 U.S. Rep Hakeem Jeffries announced Monday the allocation of $800,000 in funds from the most recent federal budget to construct a “tidal gate” along the Canarsie waterfront, which aims to further bolster the vulnerable waterfront nabe from the adverse effects of climate change.

Construction began on new tidal gates flowing into Fresh Creek last October, and is expected to be completed by this summer. The gates, placed at the end of sewage pipelines running along Avenues K, L, M, and N, and Seaview Avenue, close up during storm surges to prevent water, trash and other debris from entering the sewer system and backflowing into catch basins and people’s homes.

The $800,000 in federal funds will go towards building a tidal gate against another, separate storm drain at Avenue K and East 108th Street.

The money comes from a fund within the federal budget for community-level projects, Jeffries said at a press conference on East 108th Street on Monday. When given the opportunity to allocate such funds, Jeffries approached the city’s Department of Environmental Protection to see what projects in Canarsie needed money, to which they had just the thing he was looking for.

“The combination of degraded sewers, being surrounded by three bodies of water…as well as the rise in extreme weather events resulting from the climate crisis, makes this community particularly vulnerable,” Jeffries said. “That’s why it was so important in this first round of funding to fight hard to secure support for the tide gate project.”

Canarsie was devastated by Superstorm Sandy in 2012, when hundreds of residents saw their homes flooded amidst the massive tempest. Since then, flooding in the coastal community has been more frequent and intense, residents say, and it is only expected to get worse as the effects of climate change rapidly become entrenched and grow stronger in the coming years, especially for vulnerable neighborhoods like Canarsie.

The project wouldn’t have come to Jeffries’ attention without the sustained activism of the Fresh Creek Civic Association and its president, Maria Garrett, Jeffries said. Since Sandy, the group has lobbied the local, state and federal government to invest in resiliency projects on the peninsula to ensure that it remains a livable, vibrant community rather than akin to Waterworld.

“I’m so happy that [Jeffries] didn’t forget us, he remembered us,” Garrett said. “Going forward I hope you continue to fight with us, because we still have a lot to accomplish here in Canarsie.”

The investment comes two weeks after the city announced the completion of $150 million in sewer upgrades in Canarsie and East New York aimed at replacing ancient infrastructure with new, higher capacity, more resilient waste lines. Garrett told Brooklyn Paper that the next project the city undertakes should be to replace old bulkheads in Fresh Creek that no longer protect residents from rampaging stormwater.

“Because of Sandy, the bulkheads were so deteriorated that that’s how we got so much of the water,” Garrett noted.

Editor’s note: A version of this story originally ran in Brooklyn Paper. Click here to see the original story.