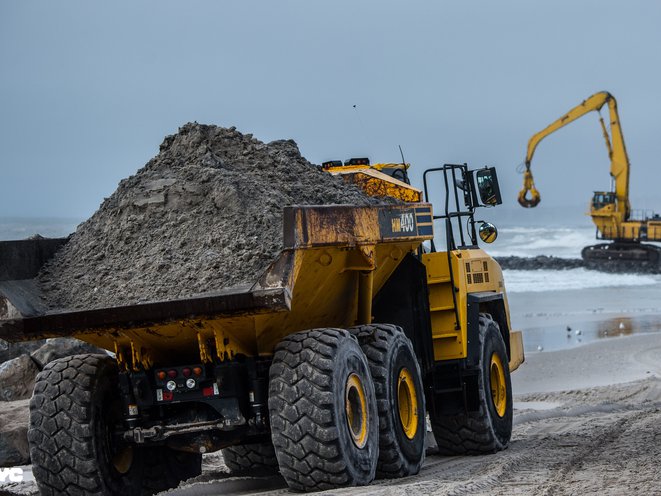 Construction on six-miles of storm surge flood protection along the Queens waterfront began on Thursday. The work is starting eight years after Hurricane Sandy battered waterfront communities in the Rockaways and across New York City.

"It's a really, really exciting milestone to now see this work move forward, especially for a community that was so devastated by Hurricane Sandy," Jainey Bavishi, the director of the Mayor's Office of Resiliency told Gothamist. "We're now working to transform the waterfront, and build climate protection into it. And this is just one of many examples that we'll see come online."

The Rockaways were hit hard by the 2012 storm. More than 1,000 structures were destroyed, and 10 feet of storm surge flooded the area. Queens residents lived for months without heat and with mold in their homes from the water damage.

The first phase of the Rockaways — Atlantic Shorefront project includes building out or restoring nearly 20 stone groin structures—similar to rock jetties—into the ocean to keep sand from washing away on the beach.

Then, a network of dunes built after the 2012 storm will be reinforced with stone and steel to make them two-to-four feet higher. Then more sand will be added to the beach.

"All these elements will provide various layers of protection for the Rockaway peninsula," Bavishi said.