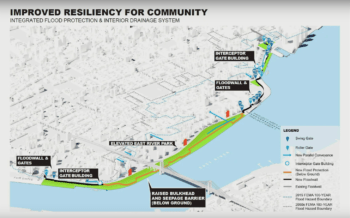 The ambitious project will help to protect the East Side community and provide new improvements to many parks.

On April 15, 2021, Mayor Bill de Blasio announced major construction on the East Side Coastal Resiliency Project. The $1.45 billion project will extend flooding protections and improve open spaces.  Neighborhoods that were heavily affected by Hurricane Sandy in 2012 will now be home to one of New York City’s most ambitious infrastructure and climate justice projects. For CityLand’s prior coverage of the East Side Coastal Resiliency Project, click here.

The East Side Coastal Resiliency Project will include a 2.4 mile system of raised parkland, floodwalls, berms, and movable floodgates. These installations will protect against the growing threat of more severe coastal storms caused by climate change. The Project will also be providing upgrades to public open spaces and amenities. These include improvements to reconstructed bridges and sewer systems.

An above-ground floodwall is planned to protect Stuyvesant Cove Park that will eventually form an integrated flood protection system. Work on this improvement will begin with the installation of an underground wall of structural sheeting in the park.

A phased construction schedule is planned for the work in East River Park. Half of the park will remain open during the park. These phased construction plans are to be employed on other projects to allow public access to open space and recreational amenities throughout the project.

The flood protection heights will be about eight to nine feet above the existing grade. The project design was formed by keeping future storms like Hurricane Sandy in mind and by using climate projections made by the New York City Panel on Climate Change. The adaptive design could accommodate up to 2 more feet of elevation in case of more rising sea levels.