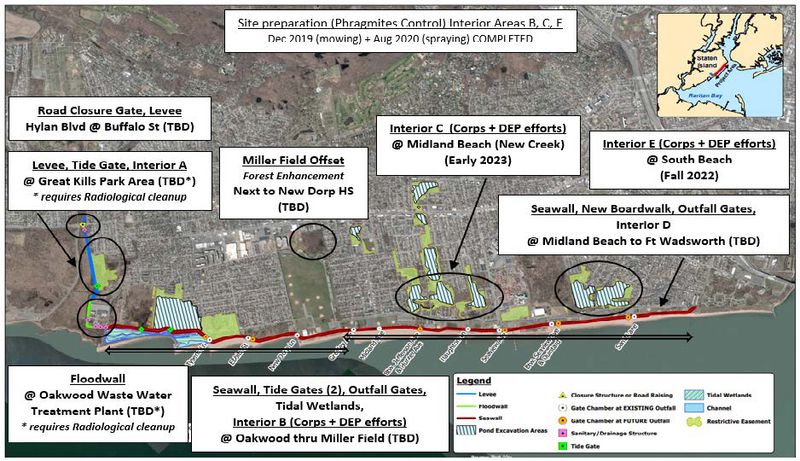 Construction on a massive coastal resiliency project along the East Shore is set to start by the end of the year, according to the federal agency leading the work.

The United States Army Corps of Engineers lists the fall as the start of work in South Beach on an interior part of the project, officially known as the South Shore of Staten Island Coastal Storm Risk Management Project.

The Advance/SILive.com previously reported on the scheduled start of that work, which will be a joint effort between the Corps and the city Department of Environmental Protection to improve internal drainage in the area. Similar work in Midland Beach is set to start early next year.

Construction work follows site preparation in 2019 and 2020 aimed at controlling phragmites in part of the project area.

An estimated completion date for the whole project, commonly known as the East Shore Seawall, isn’t yet available, but design of all eight parts of the project is currently underway, according to the Army Corps of Engineers.

When complete, the project will be comprised of internal drainage improvements, a 4.5-mile seawall from Fort Wadsworth to Oakwood Beach, along with nearly a mile of floodwall, levee and road raising from the shoreline up just past Hylan Boulevard.

The Army Corps of Engineers put the most recent construction cost estimate at $6.15 million with the federal government handling about 65% of that cost.