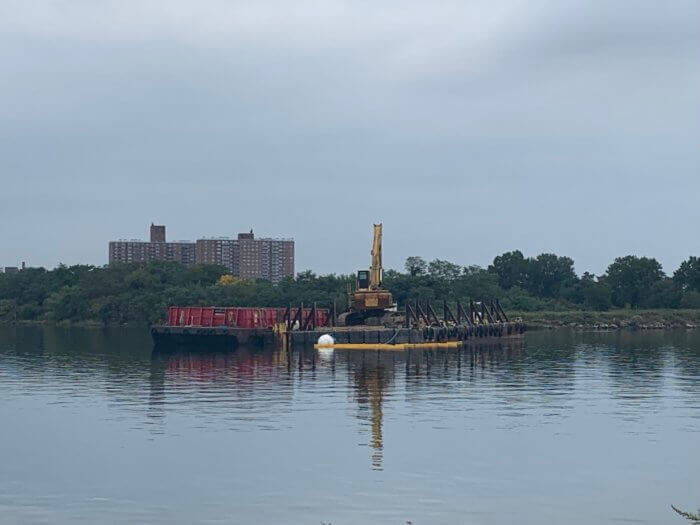 A cadre of Coney Island activists diligently monitoring the dredging of Coney Island Creek are calling on the state to end work on the peninsula’s coming ferry landing after new video shows toxic materials being dumped into the waterway.

A cadre of Coney Island activists diligently monitoring the dredging of Coney Island Creek are calling on the state to end work on the peninsula’s coming ferry landing after new video shows toxic materials being dumped into the waterway.

“Today we are standing here because our worst suspicions have been confirmed,” said Assemblymember Mathylde Frontus at a November 10 press conference on the improper dredging. “The city is telling us one thing — they are keeping us safe — but they are doing something else when they think no one is looking.”

The group, Coney Islanders for an Oceanside Ferry, took to the site that day to expose the New York City Economic Development Corporation’s alleged failure to abide by permit regulations to protect the surrounding area from toxins when dredging in Coney Island Creek to make way for the incoming ferry landing at the westerly edge of Kaiser Park.

“A resident recorded work being done right here behind us,” Frontus told the crowd, “which clearly shows in undisputed terms that materials were being removed from the polluted creek without employing any of the required safeguards to ensure toxins wouldn‘t be released into the air or water.”

The ferry landing has been a years-long topic of controversy on the peninsula. Environmentalists worry about the toxic sediment being exposed from the dredging and its potential longterm effects on marine life, while residents of the nearby Gravesend Houses fear they will lose their local greenspace to tourists — and say their health is being impacted.

“My voice is going to be heard loud and clear on behalf of everyone in Coney Island who is sick,” said Coney Island resident Charlene Davis. “My asthma has been getting worse since they started this. My question is who accepts responsibility for this? It’s good to issue them a fine, but what about people like me who are getting sick?”

Many others also argue that the landing should be situated on the ocean side of Coney Island, closer to the amusement district.

Representatives for EDC — the quasi-governmental agency spearheading the construction of ferry landings across the city — has told Brooklyn Paper on multiple occasions that they take what is seen at the creek very seriously. This time, they’ve halted any further dredging work with the subcontractor Mechanical and Marine Construction Corporation and launched an investigation into the matter.

“We are committed to safety and protecting the environment in this project, so we take what we saw in that video extremely seriously,” an agency rep said. “NYCEDC mandated Skanska launch an investigation into the incident and work performed by their subcontractor, Mechanical and Marine Construction Corp. As a result, Skanska has informed us the subcontractor is no longer working on the dredging project.”