Great Lakes
A 2013 photo of the existing masonry wall on the lakeshore fronting the French Castle at Old Fort Niagara. Inset is an aerial view of the castle and the planned work area. (Army Corps photo) 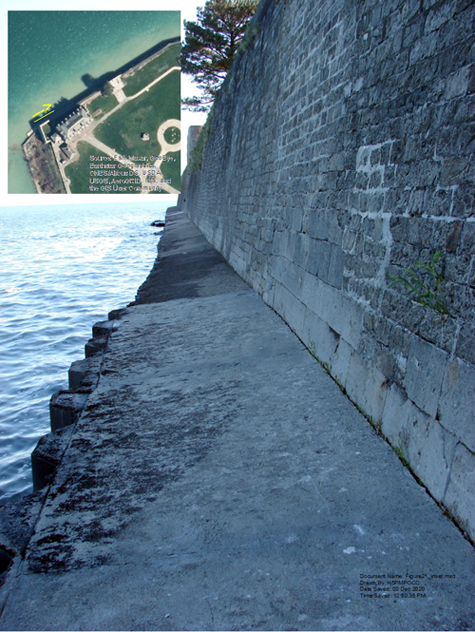 According to an Army Corps study undertaken over the past year, “Erosion directly to the east of the fort is currently outflanking the historical masonry wall and historic outercasement wall and presents a risk of failing within the next 0-2 years. …

The Army Corps estimates the Old Fort Niagara improvement project at $5,982,000, including the latest feasibility study.

As an alternative, it projected a relocation cost of $16.2 million to cover the areas targeted for comparison purposes.

“Therefore the recommended plan is justified,” the Army Corps wrote.

It said this cost would be shared with the New York State Office of Parks, Recreation and Historic Preservation, its non-federal project sponsor. State Parks would be obliged to contribute 35% toward design and construction and pay for 100% of the cost of any operation and maintenance following construction.

As to the focus area of the planned work, the Army Corps said it encompasses reinforcing the historical masonry wall from the French Castle on the west adjacent to the Niagara River shore, to the North Redoubt area on the eastern end of the lakeshore. It also includes portions of the eastern bluff shore areas (approximately 400 linear feet) just north of the Fort Niagara State Park maintenance garages, which was listed as an “area of severe shoreline erosion,” and prone to impact from high water levels, waves, ice and shoreline erosion problems.