Northeast
1 / 1Water quality impairments across Long Island during the summer of 2021. Credit: The Gobler Laboratory at Stony Brook University 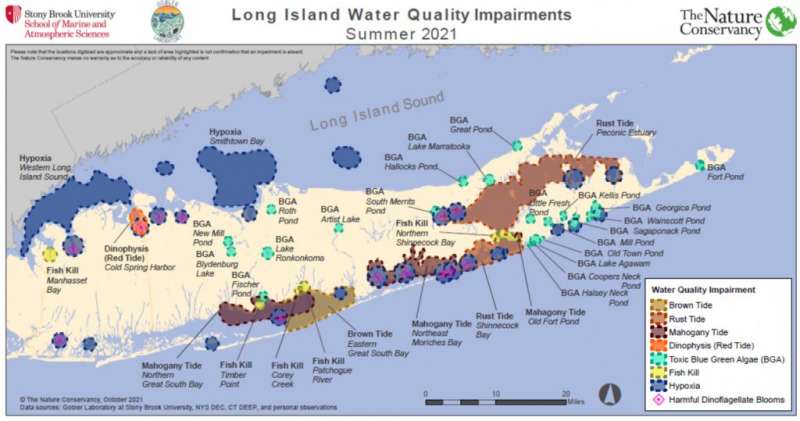 NY - A summer of discontent in Long Island's coastal waters

Scientists at Stony Brook University have completed their assessment of water quality in Long Island's estuaries in 2021 and the news is not good. During the months of June through October, every major bay and estuary across Long Island was afflicted by toxic algae blooms and oxygen-starved, dead zones.

Excessive delivery of nitrogen from onsite wastewater has been cited as the cause of these disturbing events. The news was announced on October 7 at the Patchogue waterfront by Christopher J. Gobler, Ph.D., Endowed Chair of Coastal Ecology and Conservation at the School of Marine and Atmospheric Sciences (SoMAS) at Stony Brook University.

"It began with mahogany and brown tides in June and ended with a harmful rust tide that continues today across eastern Long Island," said Gobler. "In between, a record-setting two dozen low oxygen dead zones were identified from Great Neck to East Hampton, over 20 lakes and ponds were affiliated with toxic blue-green algae blooms, and fish kills across another half dozen sites. This has become the new normal as Long Island deals with a dual assault of climate change and excessive nitrogen loading."

The summer of 2021 stood out as having nearly double the average rainfall total, with more rainfall coming during each individual storm. This may be the new normal as scientists predict Long Island will experience more precipitation in total in the future due to climate change. This excessive rainfall brings more nitrogen loading from land to sea, fueling harmful algal bloomsand dead zones. For example, following tropical storms Henri and Ida, a mild rust tide expanded and intensified all across the east end of Long Island and the dead zones expanded across Long Island Sound and elsewhere.

Excessive nitrogen coming from household sewage that seeps into groundwater and ultimately, into bays, harbors, and estuaries or, in some cases, is directly discharged into surface waters, is a root cause of these maladies. Suffolk County and Nassau County completed 'subwatershed studies' last year that identified wastewater as the largest source of nitrogen to surface waters. Excessive nitrogen stimulates toxic algal blooms that can, in turn, remove oxygen from bottom waters as they decay. Policies to mitigate nitrogen loading such as upgrading onsite septic systems are, therefore, the best defense against these impairments, explained Gobler.

The outbreaks of blue-green algal blooms in 2021 are a concern for both human and animal health. For the past six years, Suffolk County has had more lakes with blue-green algal blooms than any other of the 64 counties in New York State, a distinction that is likely to be repeated in 2021. Blue-green algae make toxins that can be harmful to humans and animals and have been linked to dog illnesses and dog deaths across the US and on Long Island.

Of equal concern is the widespread nature of dead zones across Long Island. Dead zones are regions of low or no oxygen. The NYS Department of Environmental Conservation indicates that marine waters should never have less than three milligrams of dissolved oxygen per liter to allow fish to survive. Through the summer, more than two dozen sites across Long Island did not meet this criterion, and in several cases, fish kills occurred.

"The data reveals that many sites are not suitable habitats for sustaining fish and shellfish," added Gobler.

The occurrence of these events such as brown tide and rust tide, have led to the collapse of critical marine habitats such as seagrass, major fisheries on Long Island such as scallops and clams, and the coastal wetlands that help protect waterfront communities from the damaging impacts of storms. Groups such as The Nature Conservancy have been working for more than a decade to revive and restore these habitats and shellfish but have been challenged by algal blooms such as those witnessed during the summer of 2021.

"It has gotten to the point that we have to watch News 12 each week to see where it is safe to swim or fish," said Carl LoBue, Senior Scientist for the Nature Conservancy. "The research findings are conclusive. We know how to fix this and it's time to act. The longer we wait to fix our water quality problems, the longer it will take and the more expensive it will be."

The report on the 2021 summer was compiled by Dr. Gobler, whose lab group has been monitoring and sampling Long Island's waters on a weekly basis every summer since 2014. Data was also generated by the Long Island Sound Study which is funded by the US Environmental Protection Agency and the NYS Department of Environmental Conservation.