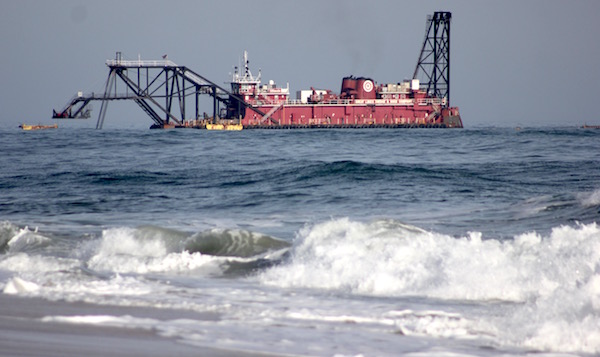 The largest of these projects is the Fire Island to Montauk Point Reformulation Study, in the works for the past 60 years, which contains recommendations for $1.7 billion worth of work to manage tidal flooding, waves and erosion from coastal storms along 83 miles of the South Shore of Long Island.

On the East End, FIMP calls for shoring up beaches and dunes in downtown Montauk, along Dune Road between Shinnecock Bay and the Atlantic Ocean at Tiana Beach and just west of Shinnecock Inlet, where Army Corps contractors spent last winter conducting an emergency breach repair dredging project. Farther west, particularly in low-lying areas like Mastic, FIMP calls for raising more than 4,000 houses out of the floodplain.

In response to major storms, the FIMP plan has been revised significantly since it was initiated, including a substantial set of changes after 2012’s Superstorm Sandy, which were the subject of the last FIMP public comment period in 2016.

The bill also includes several other studies and projects, including some on the North Fork, announced Congressman Lee Zeldin on Monday evening, including the Hashamomuck Cove Coastal Storm Risk Management Project in Southold, and authorization for feasibility studies for Wading River Creek in Riverhead, Reel Point Preserve on Shelter Island, Goldsmith Inlet in Southold and Lake Montauk Harbor in Montauk.