Northeast
via NYC DEPTARTMENT OF DESIGN AND CONSTRUCTION 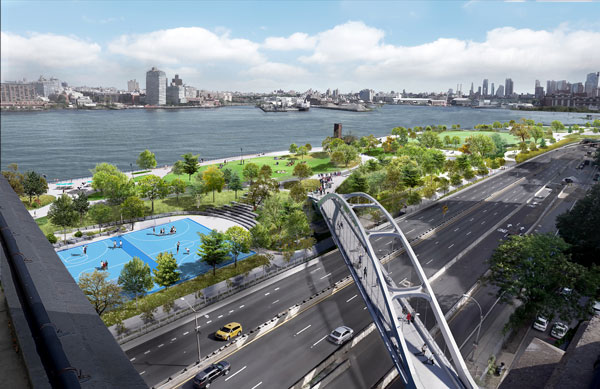 A 2.4-mile stretch of shoreline along the East River in Lower Manhattan is undergoing a multi-year project to protect the lowest lying neighborhoods on the island from rising sea level and storms the likes of Hurricane Sandy that caused roughly $19 billion damage to New York City in 2012.

Tabbed at $1.45 billion the ambitious flood protection initiative by the city integrates a series of cast-in-place concrete floodwalls, 18 steel floodgates, berms and raised parkland to heights of eight-to 10-feet above existing grade.

Called the East Side Coastal Resiliency (ESCR) project, it is the first leg of the proposed “big U” – a 10-mile ribbon of protection extending from midtown on the west side of Manhattan south around the tip of the island and north up to the east side, Ian Michaels, executive director for public information, New York City Department of Design and Construction (DDC), told the Daily Commercial News.

BIG won a U.S. government sponsored competition to oversee the project. The design firm is based out of New York City and Copenhagen.

In July the second gate at about 80-feet long of the ESCR will be hoisted by a crane onto tracks and into position along the concrete wall, says Tariq Bashir, executive project director of ESCR, for the DDC. The smaller first gate that weighed 16 tons was placed with a 190-foot tall mobile crane earlier this year.

Gate installation is tricky and “perfect alignment” with the concrete wall is critical to ensuring a watertight fit, Bashir says, adding a below grade barrier consisting of sheets of steel will prevent seepage during storms.

The multi-ton metal gates are manufactured by Linita Design & Manufacturing Corp. in Lackawanna near Buffalo.

While some of the 18 gates will slide on rollers, others will be designed to swing open.

Bashir says the construction program is complex and poses numerous first-time challenges for the building team which is probably why the construction community showed little interest in bidding on the original tender package.