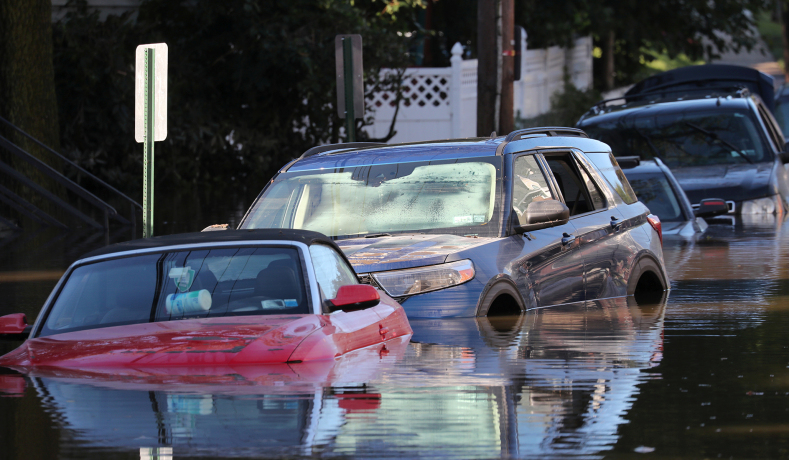 NY - Ida’s Reminder That Climate Policy Should Be Built on Resilience, Not Delusion

I was infinitely more fortunate than many, many people, but my Wednesday evening still did not go entirely as planned. I emerged from a cinema to find a downpour, the subway down, and that cabs were nowhere to be seen. Passing on the chance to join a sodden group sheltering in an ATM zone, I trudged the 25 or so blocks home, thinking about . . . infrastructure.

Nearly a decade after the (far more destructive) Hurricane Sandy, New York City’s preparedness for, yes, anastonishingamount of rain — an aftershock from Hurricane Ida — appeared less than impressive. And this was not the only time that something like this has happened recently. In Julypart of the subway had found itself underwater after another downpour, on that occasion in the wake of Hurricane Elsa.

The New York Times (from July):

When fast-moving storms flooded parts of New York City’s vast subway system on Thursday, they stranded some rush-hour commuters and underscored just how vulnerable the city’s underground transportation lifeline is to water . . .

The Metropolitan Transportation Authority, which operates the 472-station subway, has spent $130 million to address water issues as part of a 2017 subway action plan, including cleaning and repairing 40,000 street and sidewalk vents that allow water to run down into the subway, and clearing drainage pipes under tracks and inside stations that carry rainwater to pumps . . .

To be fair, much more than that has been spent on toughening the system.

New Yorkers can’t help but ask just what the MTA has accomplished since 2012’s Superstorm Sandy. After nine years and at least $5 billion of repairs designed to harden the system against the threats of inundation, why are subway riders still getting washed out? The catch, says Freudenberg, is that deluges like this are different because they don’t just hit coastal areas. “If you look at Sandy, which was a coastal storm, we’re much better prepared today for storm surge.”

Sandy flooded the subway tunnels with millions of gallons of saltwater from the Atlantic Ocean, corroding the intricate power cables and lines that keep the system running 24 hours a day, 365 days a year. It inflicted, in turn, more long-term damage: For years, I reported on the shutdown of the Canarsie Tunnel, which had to be totally rehabilitated with climate resiliency in mind. The city and state are still completing recovery projects in low-lying areas from then.

But record-breaking rainfall, which blindsided the city in its intensity and pace, poses a different threat to the entire system — and flood-proofing it poses a bigger lift. At a media appearance the day after the storm, Janno Lieber, the MTA’s acting chairman, admitted as much. “We’ve done a ton on coastal resiliency. So all those areas that were hit by Superstorm Sandy — the under-river tunnels — they’ve been made much more resilient and impervious to storms,” Lieber said. “But what we’re seeing now is these repetitive flash floods which are at higher ground. The street-level drainage system gets overwhelmed and then the water gets into the subway in mass quantities.”

Having miles of impervious surfaces leading to storm drains dumping excess water into subway tunnels that take 15 years to unclog is a big problem.

If the frequency and intensity of storms such as Wednesday night’s are the result of climate change (here’s CNN on that topic and, on the specific subject of hurricanes, here’s Reason), and if the change to the climate up to now is (as the IPCC claims) effectively irreversible (to be clear: the IPCC still maintains that even more damaging climate-related change further in the future can be averted if we act in time), it would be sensible — and this is true far beyond New York City — to, as I argue below, prioritize our climate spending for now on reinforcing our infrastructure. This is a better use of funds over more-ambitious (to use a gentle adjective) and grotesquely expensive schemes focused on altering what the climate may be in 2100. That said, allocating resources in this way is about weighting. It is not a binary process. It does not rule out government support for research into new technologies or, say, backing nuclear energy. Hurling money at Amtrak, however, ought to be out of the question.