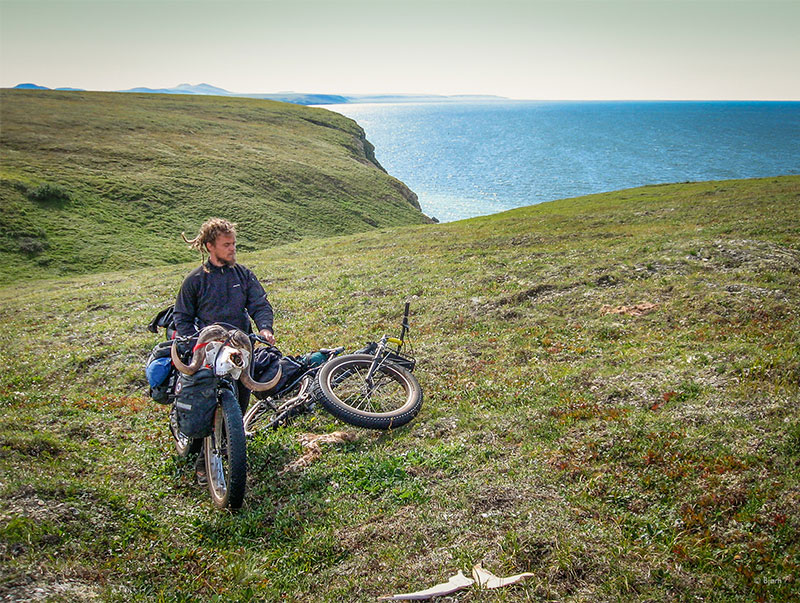 North - What’s Become of the Arctic

Alaska is heating up twice as fast as the rest of the country. Will journalists find a way to tell the whole story?

Over the past two summers, Bjørn Olson rode a fat-tire bike seven hundred miles along the shoreline of the Chukchi Sea, from the small city of Kotzebue, on the Arctic Circle, to Utqiagvik, the northernmost settlement in the United States. He pedaled the beaches, mostly, along with his partner, Kim McNett, and a couple of friends who joined for part of the way. Where old snowdrifts blocked their way, they pushed their bikes over a mountain pass. Nobody had ever made that trip before. Nobody had ever contemplated making it.

Olson, forty-five, is lean, tattooed, and sandy-haired, with a wisp of chin beard. He and McNett ran into caribou on the tundra and chased a grizzly off a barrier island. They saw hundreds of thousands of nesting seabirds. When they strapped their bikes onto inflatable rafts to pass protruding cliffs, they watched murres, kittiwakes, and puffins dive-bomb into the water. Elsewhere on the beaches, they swerved around piles of dead birds that had washed up in the tide.

All over, they observed signs of the warming Arctic. They looked for GPS shore stations marked ten years prior along the eroding coast, only to realize that some were now out in the water. They passed an ancient Inupiat village site crumbling out of the thawed permafrost and washing away. They visited a modern village, Point Lay, that not long ago moved back from an exposed beach. Olson and McNett happened to arrive just in time for a whale-hunt feast. At the local school, where blue tarps were spread on the floor of the gym, they joined the whole village for boiled beluga, bird soup, and fry bread, and they asked the whaling captains about the route beyond. The travelers learned that there was still time to follow the barrier island north, though soon that beach would fill with thousands of walruses, which have taken to swimming ashore in summer now that ice floes disappear. To shield this unprecedented animal behavior, for three years Point Lay had closed itself off to uninvited visitors, including journalists.

What Olson saw on his trip horrified and angered him. Back home, in the town of Homer, he is a climate activist and filmmaker, and he manages a website called Alaskans Know Climate Change, full of links to science backgrounders and suggestions for reducing carbon emissions. On Facebook, he posts news articles—about sea ice disappearing, glaciers retreating, salmon gasping in warm rivers and dying before they spawn. There are lots of good stories about how global warming is affecting Alaska. But they rarely seem to have much impact.

It drives Olson crazy. Journalists, he says, can’t seem to break through the daze created by their own steady gloom-and-doom coverage. “Learned hopelessness,” he called it in a newspaper column.