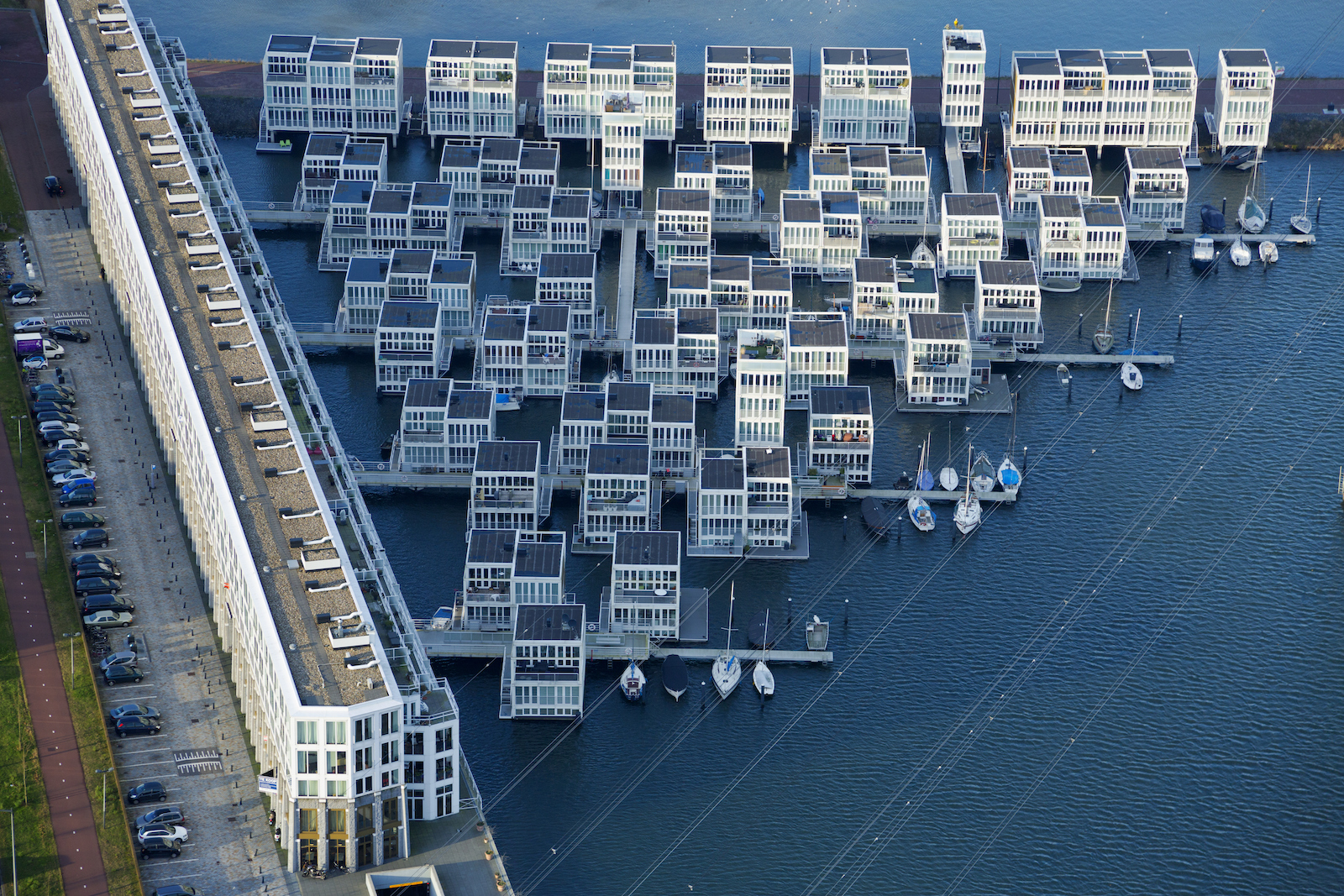 Faced with worsening floods and a shortage of housing, the Netherlands is seeing growing interest in floating homes.

This story was originally published by Yale Environment 360 and is reproduced here as part of the Climate Desk collaboration.

When a heavy storm hit in October, residents of the floating community of Schoonschip in Amsterdam had little doubt they could ride it out. They tied up their bikes and outdoor benches, checked in with neighbors to ensure everyone had enough food and water, and hunkered down as their neighborhood slid up and down its steel foundational pillars, rising along with the water and descending to its original position after the rain subsided.

“We feel safer in a storm because we are floating,” said Siti Boelen, a Dutch television producer who moved into Schoonschip two years ago. “I think it’s kind of strange that building on water is not a priority worldwide.”

As sea levels rise and supercharged storms cause waters to swell, floating neighborhoods offer an experiment in flood defense that could allow coastal communities to better withstand climate change. In the land-scarce but densely populated Netherlands, demand for such homes is growing. And, as more people look to build on the water there, officials are working to update zoning laws to make the construction of floating homes easier.

“The municipality wants to expand the concept of floating because it is multifunctional use of space for housing, and because the sustainable way is the way forward,” said Nienke van Renssen, an Amsterdam city councilor from the GreenLeft party.

The floating communities in the Netherlands that have emerged in the past decade have served as proof of concept for larger-scale projects now being spearheaded by Dutch engineers not just in European countries like Britain, France, and Norway, but also places as far-flung as French Polynesia and the Maldives, the Indian Ocean nation now facing an existential threat from sea level rise. There is even a proposal for floating islands in the Baltic Sea on which small cities would be built.

“Instead of seeing water just as an enemy, we see it as an opportunity,” says a Rotterdam city official.

A floating house can be constructed on any shoreline and is able to cope with rising seas or rain-induced floods by floating atop the water’s surface. Unlike houseboats, which can easily be unmoored and relocated, floating homes are fixed to the shore, often resting on steel poles, and are usually connected to the local sewer system and power grid. They are structurally similar to houses built on land, but instead of a basement, they have a concrete hull that acts as a counterweight, allowing them to remain stable in the water. In the Netherlands, they are often prefabricated, square-shaped, three-story townhouses built offsite with conventional materials like timber, steel, and glass. For cities facing worsening floods and a shortage of buildable land, floating homes are one potential blueprint for how to expand urban housing in the age of climate change.