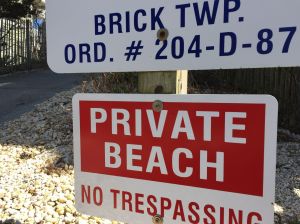 NJ - When it comes to sand replenishment, the Sierra Club is all wet

Winston Churchill once said: “Democracy is the worst form of government, except for all the others.” The same happens with the replenishment of beaches.

Last week, a coalition of activist groups held a press conference on Monmouth County Beach to protest the beach restoration.

But the alternatives are worse.

You wouldn’t have known it from the histrionics at that press conference,

“We have continued to see failed beach replenishment projects that dump millions of dollars of sand on our beaches that just fade with the next storm,” said Taylor McFarland of the New Jersey section of the Sierra Club.

I emailed McFarland to ask where he got that idea from. She did not answer.

A better source is Stewart Farrell. He is the director of the Coastal Research Center at the University of Stockton, which consults on beach replenishment projects.

“Sand doesn’t disappear in a storm,” Farrell said. “The the sand disappears when there is a storm and if it comes back in two weeks, it will be there again. “

That’s the way we should look at alternatives to beach restocking, Farrell said.

“They tried almost everything else years and years ago,” he said.

One option, he said, was “You could shield the entire coastline with rocks.”

But then you wouldn’t have a beach.

“The other alternative is to walk away and let Mother Nature move the beach inland,” Farrell said.

But as we saw with Hurricane Sandy, that causes billions of dollars in damage to the homes of those who live inland.

However, retiring from the beach is what the Sierra Club promotes on its website:

“The chapter believes that dollar beach replenishment projects should be accompanied by the removal of structures from the water’s edge, restoring natural features such as dunes, wetlands, coastal marshes, natural habitats and stream buffer zones, and undertaking other coastal restoration projects ”. the site states.