Northeast
Southampton Town officials are considering burying a pipe under Dune Road to help flush pollutants out of Shinnecock Bay. via Southampton Town 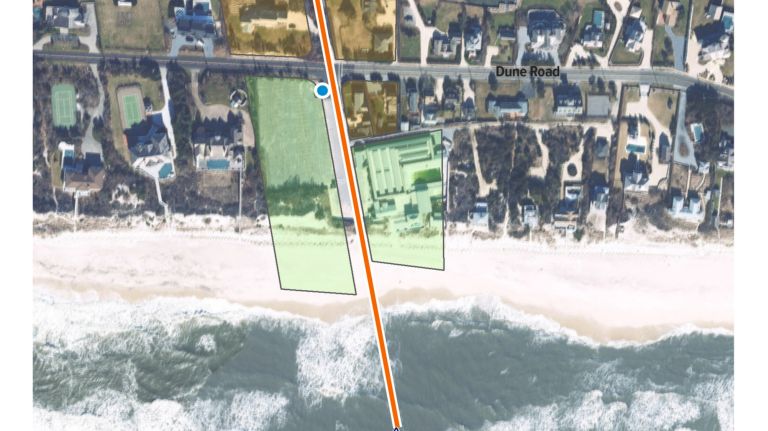 Southampton Town is exploring a multimillion-dollar concept to improve water quality in Shinnecock Bay through a 2,200-foot underwater pipe beneath Dune Road that would pump ocean water to flush out the waterways.

The state Office of General Services and the Department of Environmental Conservation have commissioned the Fairfax, Virginia-based engineering consulting firm Dewberry to study the issue. A July study summary shortlisted three options, one of which calls for placing an underwater pipe near Triton Lane in East Quogue, one calling for a permanent cut and another calling for a seasonal cut on Dune Road. Town officials say they favor the pipe concept, and they expect the final report soon.

The health of western Shinnecock Bay is impaired "predominantly due to lack of tidal flushing with the ocean, and watershed pollutant loadings," the summary reads. The lack of flushing causes lower oxygen levels and has led to harmful algal blooms.

Southampton Town Supervisor Jay Schneiderman estimated the pipe project could run between $30 million and $50 million, but said that would be less than replacing thousands of aging septic systems that contribute to nitrogen pollution. The results could also be quicker.

"Shinnecock Bay is a very important water body, particularly for shellfish and marine habitat," said Schneiderman, adding that the town could look to federal grants to offset the project’s cost. "We’ve lost a lot of these areas to shellfishing, so we’ve been looking for additional ways to improve water quality."

"It’s a long-term solution, [but] it will take decades before we see any significant result from doing that," Schneiderman said.