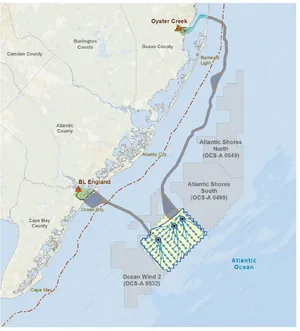 The federal Bureau of Ocean Energy Management extended the deadline for public comment on the environmental impacts of an offshore wind project after facing complaints 45 days was not long enough to review the 1,408-page impact statement.

The project has been touted by state officials and many environmentalists as an important step in reducing New Jersey's reliance on fossil fuels, a contributor to global climate change and rising sea levels. If approved, it would be located about 15 miles offshore near Atlantic City and provide enough energy to power 500,000 New Jersey homes, according to Ørsted.

Construction would erect up to 98 wind turbines across Ocean Wind 1's lease area.

On Wednesday, the Bureau of Ocean Energy Management announced the public would receive a 15-day extension to comment on the project's environmental impacts, moving the deadline to receive comments from Aug. 8 to Aug. 23.

"We're certainly pleased to get an extension, but as far as we're concerned, it's not enough, especially for a project of such a big size," said Zachary Klein, policy attorney for Clean Ocean Action, an environmental organization that had sought an additional 60-day extension to review the environmental impacts document.

"We do have a lot of concerns about the environmental impacts of this project more generally," Klein said. "One of the biggest gripes that we have is that we don't feel that there's an appropriate pilot project that has taken place off of the New Jersey coast."

Klein said other offshore wind farms in Europe and off Rhode Island are poor comparisons.

"The reality is the waters of New Jersey are wildly different … for a number of reasons, not just the type of species, but consider the weather conditions, the water temperature − which in turn are going to affect the frequency and severity of extreme weather events." he said. "The turbines are going to have to withstand storms, withstand conditions that they simply haven't had to in other areas."