Northeast
Sunset Beach in Cape May, silhouetting an old cement ship that sunk years ago. South Jersey has seen the fastest level of sea rise on the East Coast, according to a Rutgers study. KATE WISE 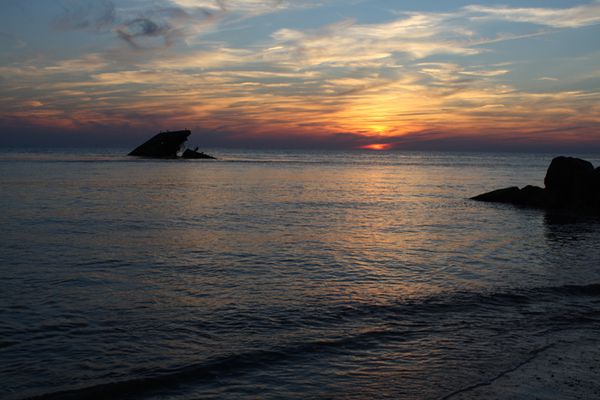 A Rutgers study that looked at sea level rise over the past 2,000 years found that levels rose twice as fast on average in the 20th century, with South Jersey seeing the highest rates.

A new study led by Rutgers University that looked at sea level rise at six locations on the East Coast over the last 2,000 years found that levels rose twice as fast in the 20th century compared with previous eras, and that South Jersey experienced the highest rates overall.

The authors concluded in the study published in the journal Nature Communications thatglobal sea rise from melting ice and warming oceans from 1900 to 2000 increased at a rate more than double the average for the previous 1,800years.

Sea levels don’t rise uniformly like water running into a bathtub, but rather are influenced regionally by both local and global factors. The authors took into account a complex array of influences including a natural sinking of the land due to geological reasons, ocean dynamics, and groundwater withdrawal.

The study looked at three locations in New Jersey: Leeds Point in Atlantic County, Cape May Court House in Cape May County, and Cheesequake State Park in Middlesex County. They also looked at East River Marsh in Connecticut, Pelham Bay in the Bronx, and Roanoke Island in North Carolina.

“We looked at the breakdown of processes contributing to sea-level rise at individual sites over the last 2,000 years to look at the influence of each contribution and how the contributions change over time,” lead author Jennifer Walker, a postdoctoral associate at Rutgers’ Department of Earth and Planetary Sciencesin New Brunswick, said in an email.