Northeast
This image depicts what Ocean Wind's towering wind turbines would look like off the southern New Jersey coast. (Courtesy of Orsted) 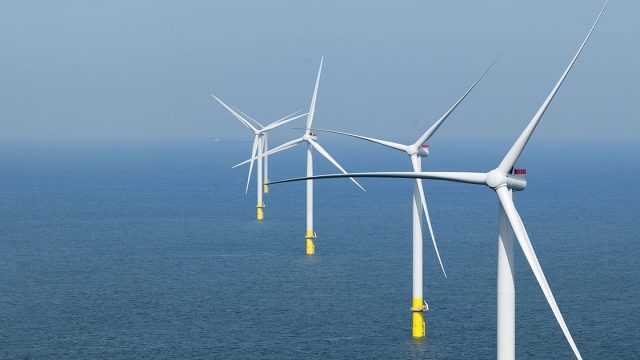 Cape May County and its shore towns presented a united front in opposing plans for an underground transmission line that would cut through environmentally sensitive wetlands and beach lots in Ocean City to connect an offshore wind farm to the land-based power grid.

During a Zoom hearing Thursday before the New Jersey Board of Public Utilities (BPU), attorneys representing the county and shore towns criticized the Danish energy company Orsted for its preferred route for the transmission line to serve the proposed Ocean Wind 1 wind farm.

No formal action was taken on the Orsted petition by the BPU. Both sides involved in the dispute over the transmission line as well as the public will be apprised of the time frame for a decision at a later date, BPU President Joseph Fiordaliso said.

The BPU is charged with deciding on whether to grant an easement and regulatory permits for the transmission line.

During oral arguments, attorneys representing Cape May County, Ocean City, Upper Township and nine other municipalities in the county said an alternative route through Great Egg Harbor should be considered for the line. They also asserted that the decision should not be made by the BPU, but rather the state Office of Administrative Law.

The sum of the oral arguments on behalf of the county and the municipalities is that the parties feel “shut out” of the decision-making on where the transmission line is installed.

Orsted plans to run a transmission line under the seabed to bring electricity onshore through the beach lots of 35th Street in Ocean City. Orsted has not publicly disclosed how much the transmission line would cost.

The underground cable would travel west to Bay Avenue, north on Bay Avenue to Roosevelt Boulevard, west across Peck Bay at Roosevelt Boulevard Bridge and then continue on to Route 9 to property near the former B.L. England Generating Station, according to Orsted’s petition.

The result of the line through 35th Street could mean disruption to delicate wetlands, according to the attorneys for the county and shore towns. Although the BPU hearing was solely for the purpose of considering easements for the transmission line, attorneys touched upon the impact of the project as a whole on the communities on the barrier islands.

Donohue told the BPU, an unelected board whose members are appointed by the governor, to “stand in the shoes of elected officials.”

“That is the main reason why the county has felt compelled to object to the process. The county feels strongly that the voters should not be disenfranchised. The unelected board (BPU) steps in the shoes of elected officials.”