Mid-Atlantic
Aerial views of the damage caused by Hurricane Sandy to the New Jersey coast. Last year, Gov. Phil Murphy signed Executive Order 89 to create the Climate and Flood Resilience Program within the Department of Environmental Protection, in addition to an Interagency Council on Climate Resilience. The council is charged with developing a strategy to “maintain the physical, economic and social vitality and resilience of New Jersey’s communities under the current and anticipated impacts of climate change.” This report is an important step toward that goal. 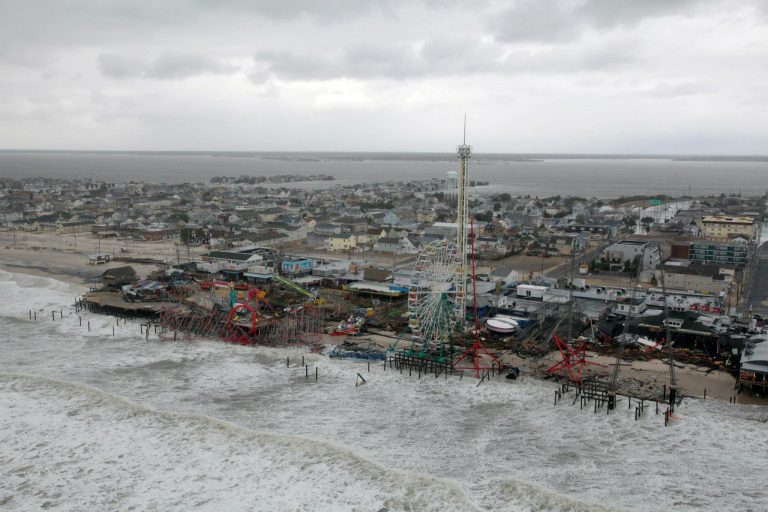 Coastal states are particularly vulnerable to climate change, and that is especially true in New Jersey. To better understand and plan for this risk, the New Jersey Department of Environmental Protection (NJDEP) released a new report by Rutgers University that examines the state’s historical rates of sea level rise and updates future projections.

The report finds that sea level has increased at a higher-than-average rate for the Garden State, and seas could rise by an additional six feet by 2100.

Nearly eight years after Superstorm Sandy devastated the state, this and other report findings can help state planners and policymakers take proactive measures to help build resilience and mitigate impacts from rising seas and future storms.

Just how much sea level rise can New Jersey expect?

To better plan for its future, New Jersey first looked to the past to understand how sea level rise has already impacted its coast.

Since 1979, seas have risen faster in New Jersey than the global average by 0.1 inches annually. Since 1911, New Jersey has experienced a 1.5-foot seal level rise, compared to 0.6 feet globally.

Subsidence, or the sinking of land, is a primary cause of New Jersey’s higher rate.

NJDEP acknowledges uncertainty and makes abundantly clear that the state’s future sea level rise depends on the ability of leaders worldwide to curb carbon emissions. The report outlines three future scenarios — high, medium and low — varying in severity depending on the rate of global emissions. Under the high-emissions scenario, New Jersey could experience an additional 3.5 feet of sea level rise in the next 50 years and 6.3 feet by the year 2100. Under the low scenario, seas rise by 2.7 feet in 2070 and 4.0 feet in 2100.

Even the low scenario underscores the need for New Jersey to act with urgency to build resilience and take preventative measures to prepare for sea level rise. Leaders around the world must also do everything in their power to curb further emissions to avoid the worst-case scenarios for coastal communities.

The report found that sea level rise will increase flooding and worsen the impacts of coastal storms from hurricanes to nor’easters. While the frequency of these storms may not increase, wind speeds from tropical storms will likely increase, creating additional flooding from storm surge.

The report acknowledges the need to better understand how climate change will affect the severity of nor’easters going forward.

Confronting a future with more sea level rise and intense flooding is daunting for any state leader.

As David Rosenblatt, New Jersey chief resilience officer and Department of Environmental Protection assistant commissioner, said, “We need to fully engage the public and stakeholders and provide a clear picture of what the impacts will be, including physical changes to our coastline, and the steps that have to be taken to adapt and become more resilient.”

By using science and modeling to understand future risks and impacts, state leaders can better prepare residents and implement the necessary solutions, such as natural infrastructure, to protect their communities, wildlife and natural resources.