Northeast
Offshore wind leases and projects under development as of December 2019. POWER / The Big Picture 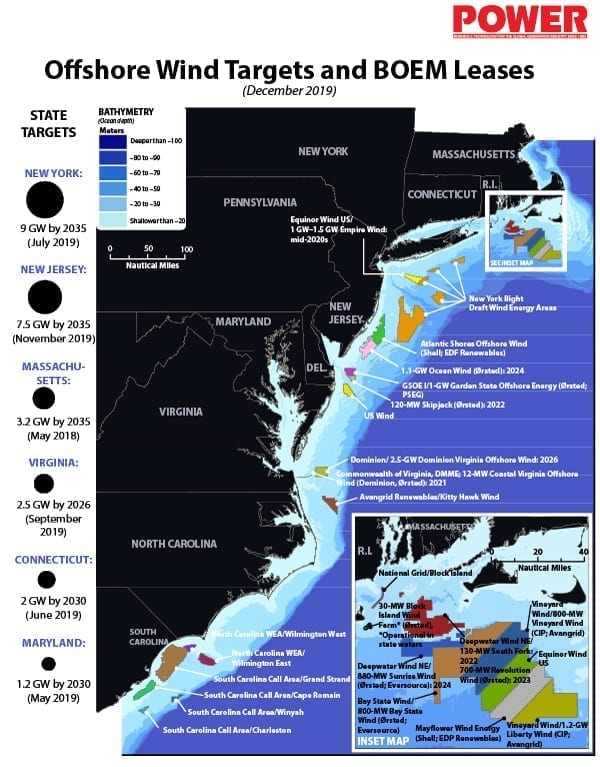 New Jersey on Sept. 9 opened a second state offshore wind solicitation that could triple its committed capacity from 1.1 GW to 3.5 GW.

The state this week also laid out a final strategy for how it will achieve its November 2019–expanded offshore wind target of 7.5 GW by 2035.

New Jersey’s five-member Board of Public Utilities (NJBPU) voted unanimously on Wednesday to open the state’s second solicitation, which seeks to award between 1.2 GW and 2.4 GW of offshore wind energy. Under the second solicitation, the board will accept applications between Sept. 10, 2020, and Dec. 10, 2020. “The Board anticipates awarding the resulting offshore wind projects in June 2021,” it said.

The board on Wednesday also issued a “Second Solicitation Guidance Document,” which it said was developed “through a robust public stakeholder process and provides the solicitation’s mechanics and timeline, project application requirements, and evaluation criteria.” NJBPU is now gearing up for the third solicitation for “at least” 1.2 GW, which will likely be issued in 2022 on track with Gov. Phil Murphy’s proposed solicitation schedule. After that, solicitations will open every two years until 2028.

Under the first solicitation issued in September 2018, NJBPU sought applications for 1.1 GW of offshore wind. It ended with the June 2019–award to Ørsted for its 1,100-MW Ocean Wind project. That project, which Ørsted is slated to build with PSEG’s support, will deploy GE Haliade-X 12-MW turbines 15 miles off the coast of Atlantic City. While the project is still in the developmental phase, it remains on track despite the pandemic to commence operations in 2024, Ørsted says on its website.‍

The second solicitation is a “major step forward” in New Jersey’s plans to deploy up to 7.5 GW of offshore wind capacity from zero today over the next 15 years, NJBPU noted. Set via the November 2019–issued Executive Order No. 92, the governor’s target expands an initial January 2018–set goal to achieve 3.5 GW by 2030. The successful realization of 7.5 GW would represent 50% of New Jersey’s projected 2035 load.