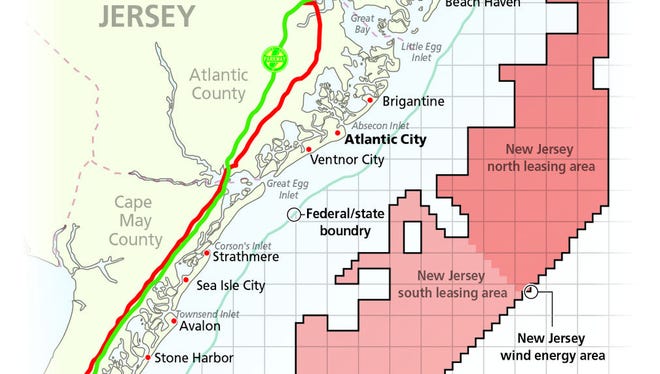 Two companies announced they submitted bids to develop wind turbines off the Jersey Shore in the latest step in New Jersey's goal to reduce reliance on fossil fuels.

Offshore wind generation companies Ørsted and Atlantic Shores announced Thursday that they submitted bids to the state Board of Public Utilities  in its second solicitation for offshore wind turbines. The state is seeking a company to build an offshore network of turbines with a generation capacity between 1,200 to 2,400 megawatts. The deadline to submit was 5 p.m. Thursday.

The BPU's solicitation is the latest part of an effort by Gov. Phil Murphy to transition half the state's energy production to  "clean" energy sources — sources that do not rely on fossil fuels — by 2030.

Last year, 94% of New Jersey's electricity was generated by nuclear energy and natural gas, according to the U.S. Energy Information Administration. In contrast, renewable energy sources made up only 5% of the state's energy supply.

Officials at Ørsted, a Denmark-based energy company that won the BPU's initial solicitation to build New Jersey's first 1,100-megawatt offshore wind farm off Atlantic City, announced they had applied for the BPU's second solicitation for turbines.