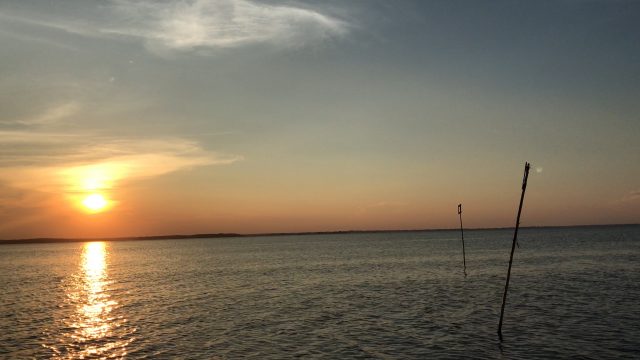 NJ - Lavallette’s Bayfront May be Venue for Groundbreaking Reef Project

If necessity is the mother of invention, the quest to enjoy a Jersey Shore summer on Barnegat Bay may spur the creation of a new structure that will promote the health of the waterway while also functioning as a new type of protective barrier against shoaling at Lavallette’s municipal boat ramp and the West Point Island Bridge.

“The waves come across the bay, strike the beach in shallow water, compared to ocean waves, but the wave action ceases at the bridge – and boom – there’s no more transport,” explained Dr. Stewart Farrell, director of the Coastal Research Center at Stockton University.

When the sand comes to rest at the bridge, it has the nuisance effect of blocking in the lagoon inside West Point Island. It also makes the boat ramp essentially useless for most boaters who cannot retrieve their vessels since the mounting sand makes it impossible to submerge trailers. These problems, however, may be solved by a large reef that could be built north of the boat ramp, made of living oysters, marine vegetation and other bay creatures.

Farrell has proposed to Lavallette the construction of a new type of “living shoreline,” only this time a reef that juts out into the bay instead of a traditional rock or wooden jetty. The proposed reef would utilize a new invention known as a tensar mat – woven fabric that can stand up to the elements of salt water – covered in oyster shells that will be designed to reroute sand and sediment while simultaneously supporting a mini-ecosystem of marine life.