Northeast
Mayor Patrick Rosenello stands atop a recently repaired dune in North Wildwood, N.J., on Tuesday, Oct. 25, 2022. The town used bulldozers to push sand back into piles to repair severe erosion from recent storms, despite a directive from state environmental officials not to do the work until the proper studies and planning took place. (AP Photo/Wayne Parry) 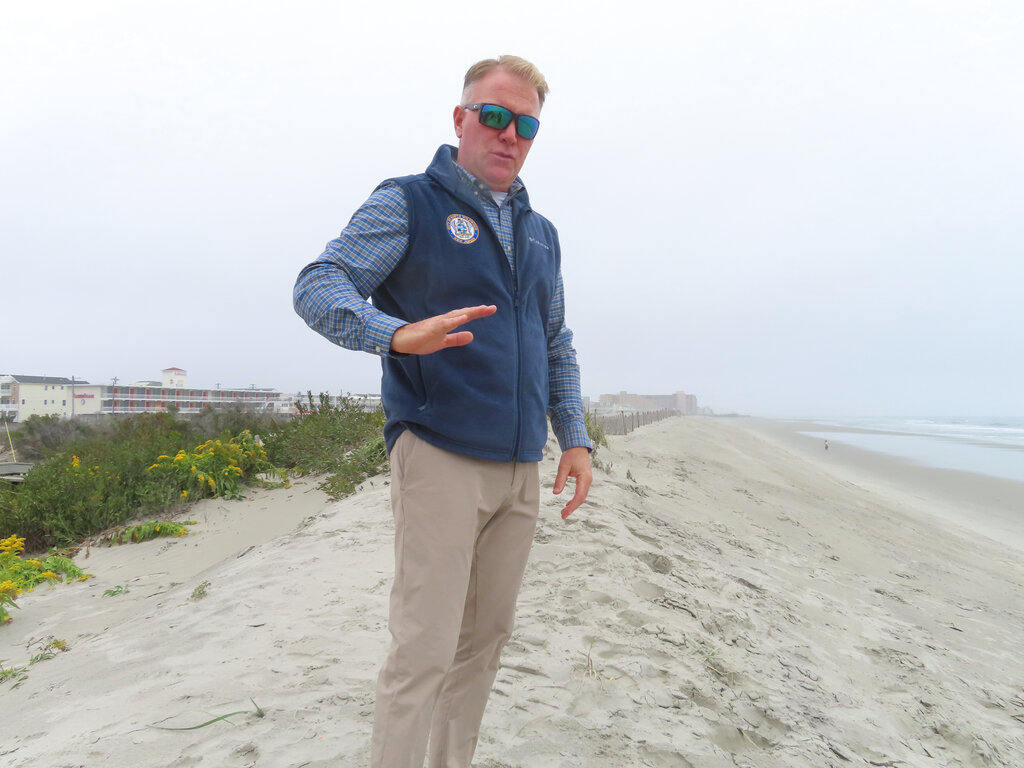 NORTH WILDWOOD, N.J. (AP) — A beach town that is defying New Jersey’s order not to shore up its eroding sand dunes is suing the state for $21 million.

That’s how much North Wildwood says it spent over the past decade on trucking sand in as part of an ultimately futile effort to hold back the waves.

North Wildwood is being sued by the New Jersey Department of Environmental Protection for defying a state order not to make emergency repairs to the dunes following several storms last fall.

The town filed its answer to that litigation on Wednesday as it asked a judge to order the state to pay North Wildwood $21 million, and to allow the city to immediately build a bulkhead along a section of the beach where the town says 75% of the dune has been washed away.

“We are now at the point where one moderate storm or even just a couple smaller storms will result in a breach” of the dunes, James Verna, North Wildwood’s project engineer, stated in the lawsuit. “There is only a few feet left of dune protection between the ocean and North Wildwood’s critical infrastructure. Simply put, what little beach and dune system that remains … will be unable to withstand the impending nor’easter and winter storm seasons.”

The DEP declined comment on the lawsuit Thursday. But in past correspondence with North Wildwood, the agency has said that no emergency condition exists, and warns that the type of work proposed by the city could actually make erosion even worse.

Mayor Patrick Rosenello said the city’s counterclaim is “a damning indictment of the incredible lack of professionalism and scientific integrity at the NJDEP. We are dealing with a real-life emergency that has the potential to put public safety at risk and damage public and private property.”

He faulted the data collection relied upon by the state, which he said was performed by an unlicensed individual using “amateur equipment” that’s no more accurate than a phone app.

The dispute involves damage to some North Wildwood beaches when the remnants of Hurricane Ian passed by in October, chewing huge chunks out of protective sand dunes.

The agency denied a request by the city to do emergency work to shore up the dunes, but the city did it anyway, prompting a December lawsuit from the state.

North Wildwood is ready to start building the bulkhead. Thursday afternoon, piles of steel sat on the sand along with a giant crane and other heavy equipment. Erosion at the site appeared worse than it was in October, when the city first acted unilaterally to make temporary repairs to the dune by pushing piles of sand up against it.

“It really is touch and go,” Rosenello said. In the event of a serious storm, he added, the city will begin installing the bulkhead “unless the judge tells us not to.”

The parties will be in court on Jan. 17 to present their preliminary cases to a judge. In the meantime, North Wildwood has proposed a visit to the site by all parties, including Superior Court Judge Michael Blee, before then.

While most of the Jersey Shore’s 127-mile (204-kilometer) coastline got replenished beaches in the years after Superstorm Sandy hit in 2012, North Wildwood has not, Rosenello said. The city is part of a proposed multi-town federal and state beach replenishment project also involving Wildwood, Wildwood Crest and Lower Township.

But numerous legal and real estate agreements must be executed before that can happen, and that project likely can’t start until at least fall 2024, the state estimated in August.