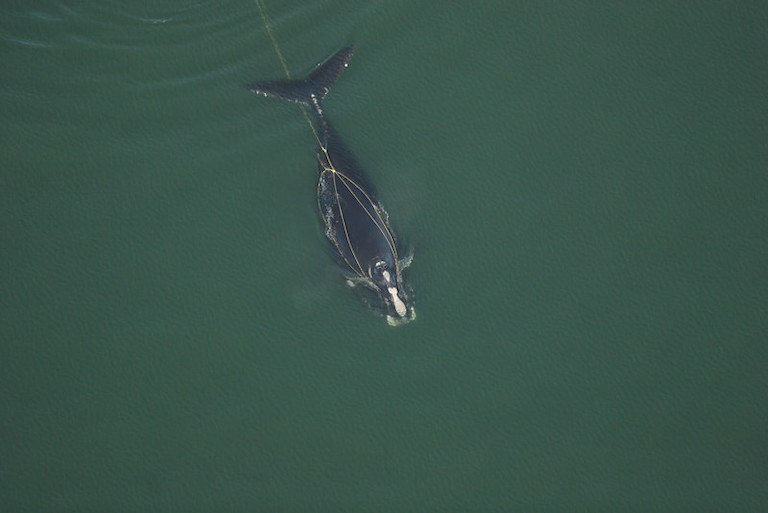 The CMA CGM Brazil, a huge cargo freighter carrying more than 15,000 containers, powered through the Atlantic Ocean, headed for New York City. North of Nantucket, it entered what’s known as a dynamic management area (DMA), a region established by the National Oceanic and Atmospheric Administration (NOAA) Fisheries to protect a population of North Atlantic right whales (Eubalaena glacialis). There’s a 10-knot (18.5-kilometer-per-hour) voluntary speed limit in the DMA. But the ship, the length of the Empire State Building, didn’t obey it. Instead, it barreled through the DMA at 13.4 knots (25 km/h), according to GPS tracking data collected by analysts in September.

“They [the ship’s company] were doing all sorts of PR about the environmentally-friendly megaship that is saving all of this carbon and doing this amazing stuff coming into all of these ports,” Gib Brogan, senior campaigns managers at Oceana, a Washington, D.C.-based NGO, told Mongabay. “We thought, you know, that isn’t really the whole story. This enormous ship is going right through whale habitat and not cooperating with the advisories that are coming out from the government.”

While the freighter doesn’t appear to have hit any whales on this particular journey, conservationists say that ship traffic, in general, poses a substantial risk to North Atlantic right whales, particularly when vessels disobey mandatory or voluntary speed limits in places where whales present. To help monitor this issue, Oceana launched a publicly available online tool called Ship Speed Watch this past June, which collects data on vessel speeds in whale conservation areas. When ships go too fast, the interactive map lights up with yellow, orange or red dots.