Northeast
The Hon. Richard Libby, brother and business partner of Demorin “the Original Libby,” who was famous for bringing oysters from Wellfleet to New York. (From The Libby Family in America, 1882) 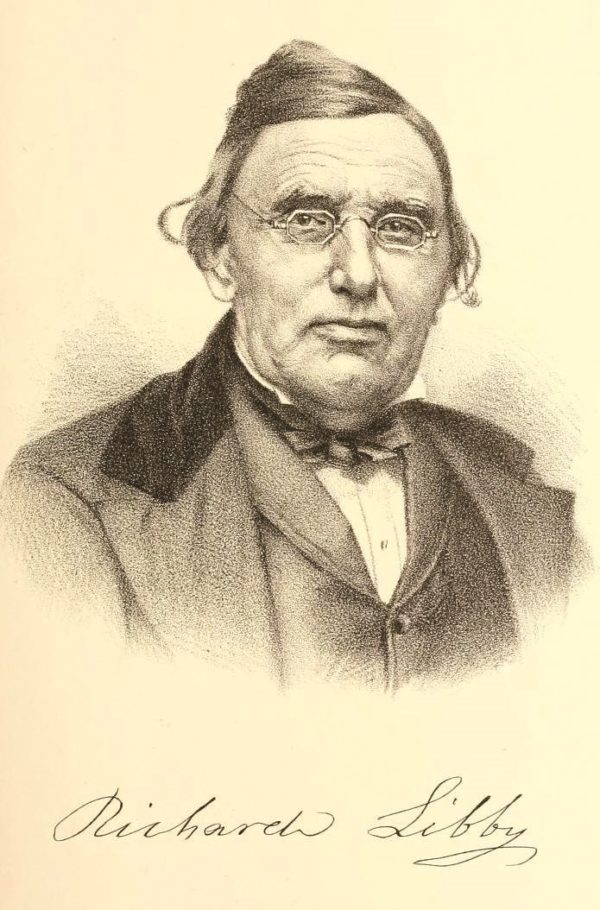 NE - ‘The Original Libby’ and His Oyster Saloon

Old-time New Yorkers called him “the Original Libby.” For his 90th birthday, a 1904 newspaper profile noted that he was “the pioneer dispenser of Boston imported lobsters, a master in the art of pickling oysters and adept at serving the bivalves on the half shell. He is even said to have been the man who originated the present method of opening oysters.”

Born in Hampton, Maine in 1814 but raised in Wellfleet, Demorin Libby was only nine years old when he began to work in shipping aboard coastal fishing schooners out of Wellfleet Harbor. He rose quickly in the ranks to bo’sun’s mate, captain, and eventually part owner of a fleet of schooners.

With his earnings, Libby ventured to Lower Manhattan in 1841 and established himself and his brother Richard in the restaurant business. His career there spanned more than 50 years, and his “oyster saloon” was patronized by the likes of newspaper editor and publisher Horace Greeley and business magnate Commodore Cornelius Vanderbilt.

In 1850, when Swedish soprano Jenny Lind — promoted by P.T. Barnum and dubbed the Swedish Nightingale — made her American debut at New York’s famous Castle Garden exhibition hall (previously known as Castle Clinton and later the pre-Ellis Island immigration station), newspapers noted that Demorin Libby prepared 23,000 pickled oysters for sale at the stands in the Garden.

Readers may be familiar with an interesting artifact from those days. In 1850, Jenny Lind also sang in the auditorium above the 1847 Fitchburg Railroad depot on Causeway Street in Boston. The station was slated to be razed in 1927 following a fire. But before its demolition, Boston railroad attorney Henry M. Aldrich salvaged one of the depot’s two granite towers and had the “Jenny Lind Tower” reassembled on his Truro Highlands property, where it is now a Cape Cod National Seashore eccentricity.

By Demorin Libby’s childhood, the plentiful native Wellfleet oysters that were once a self-sustaining industry had, a generation earlier, been overharvested to depletion. Reinvigorated during the early 1800s with the importation and planting of spat — tiny oyster seed — that fattened up in Wellfleet’s estuaries, the industry boomed again, thriving throughout the 19th century.

Henry David Thoreau, who first journeyed to Cape Cod in 1849, dedicates a chapter of his Cape Cod to John Young Newcomb, whom he refers to as the Wellfleet Oysterman, noting that “Nearly all the oyster shops and stands in Massachusetts, I am told, are supplied and kept by natives of Wellfleet.” One wonders if Thoreau had heard about the young man with Wellfleet roots who was earning a reputation in Manhattan culinary circles for his New England seafood specialties.

Demorin Libby, the eldest of 11 children, was the son of Capt. Richard Libby, who was born in Limington, York County, Maine in 1790 and raised in Hampden, Penobscot County. During the War of 1812, Richard Libby served as lieutenant of a letter of marque. Captured and held prisoner in Bermuda, he was later returned as part of a prisoner exchange.

In August 1813, Libby married Hannah Higgins Holbrook (1795-1859), the daughter of Capt. Jesse Holbrook (1766-1836) and Temperance Higgins (1770-1858). Both the Higgins and Holbrook families had deep roots in Cape Cod, Richard Higgins having been a pioneer settler at Eastham, from which Wellfleet was separated in 1763. The Holbrooks, writes Frederick Freeman in his Barnstable County history, have been “highly respectable in Wellfleet for a long period.”