Northeast
The average annual economic damage, in millions of today’s dollars, by the end of the century from climate change for each county in southern New England. Roger Warburton / ecoRI News 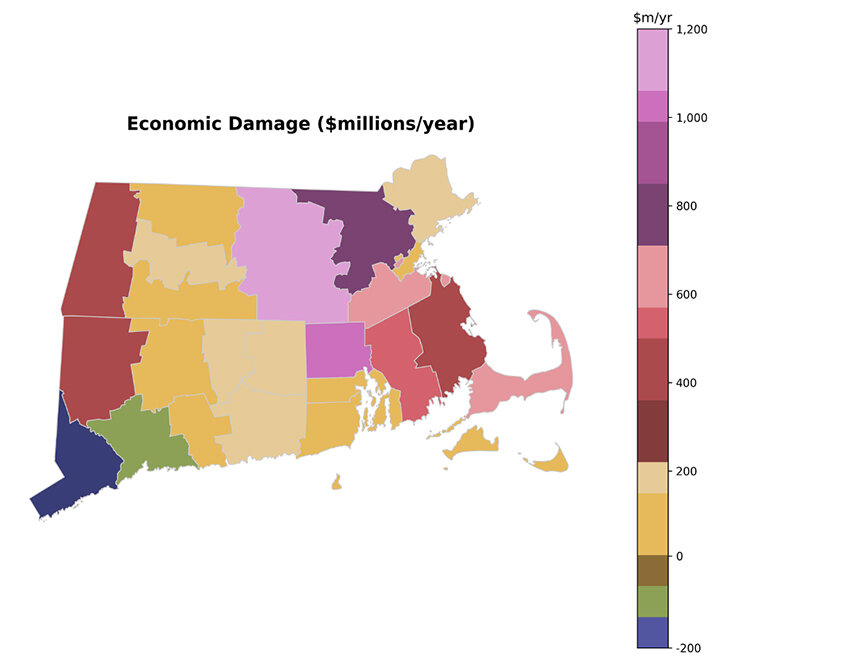 The above map and the others below, created using data from a 2017 study titled Estimating Economic Damage from Climate Change in the United States, summarizes the yearly economic damage, in millions of dollars annually, to the counties in southern New England by the end of the century.

Therefore, in concert with state and national activities, each county will likely need to develop its own specific mitigation strategies. The economic damage will come from many different sources.

Storms and flooding
Southern New England is vulnerable to the coastal impact of hurricanes, storms, floods, and sea-level rise. The total damage to the three states is estimated to average $7 billion to $8 billion annually.

A comparison with the impact of Superstorm Sandy on New Jersey in fall 2012 is useful. Sandy destroyed property worth about $25 billion and decreased New Jersey’s gross domestic product by $12 billion, according to a 2013 report. In the last quarter of 2012, Sandy caused employment losses of 4,200 jobs and a drop in personal income of $1 billion.

Sandy was a once-in-a-lifetime event. By the end of the century, Rhode Island, Massachusetts, and Connecticut could experience a Sandy-level event every two to three years, according to research projections. Rebuilding and recovery from each storm would be completed just in time for the destruction caused by the next storm.