Northeast
The distribution of black sea bass can be seen on these maps from NOAA’s Distribution Mapping and Analysis Portal. Bass expanded about 140 miles north from 1974 to 2019. NOAA 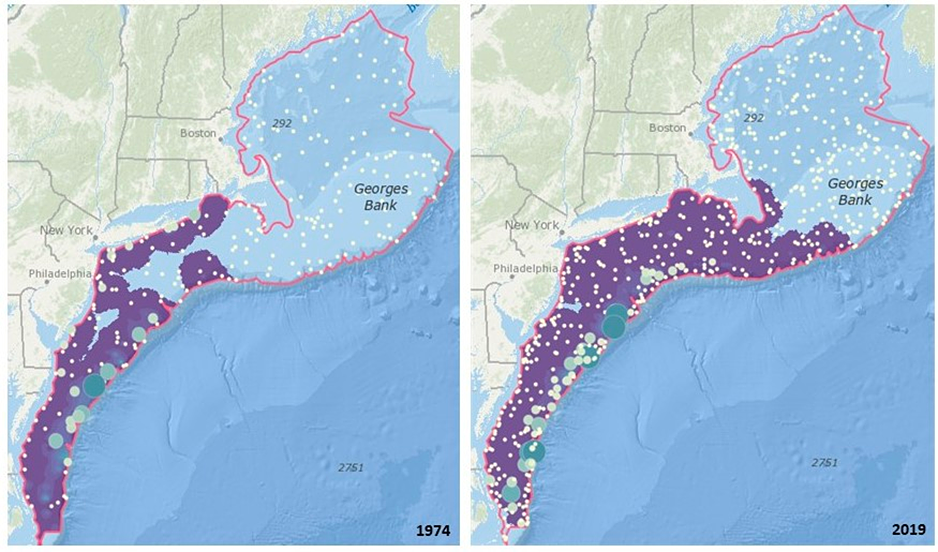 As climate change forces more fish to move north in search of cooler waters, NOAA has created a way for the public to track their movements.

NOAA Fisheries announced the breakthrough yesterday, launching its Distribution Mapping and Analysis Portal, a mapping tool that shows the location of various fish species and how they’ve moved over the years.

As an example, the portal shows how the distribution of black sea bass along the Atlantic coast moved roughly 140 miles north from 1974 to 2019.

“This is one of the most important actions NOAA Fisheries has taken to date to move toward climate-ready fisheries management,” said NOAA Fisheries Chief Janet Coit.

The new portal, which NOAA developed in collaboration with the Global Change Ecology and Evolution Lab at Rutgers University, shows data for more than 800 marine fish and invertebrate species from bottom trawl surveys in five regions: the Northeast, Southeast, Gulf of Mexico, West Coast and Alaska.

With more species on the move, the issue has stirred confusion and anger among many fishermen and lawmakers in different regions of the country.

It has also greatly complicated fisheries management, with NOAA regulators routinely accused of moving too slowly to update fish counts as the agency sets quotas and establishes other regulations (Greenwire, May 28, 2019).

In a statement, Coit said the changes in species distributions “are already having significant impacts on key management decisions such as allocations and spatial closures” and that those impacts are only likely to increase.

But he said the new mapping tool would boost the agency’s ability “to turn the data NOAA collects into robust decisionmaking resources for the entire fishery management community.”