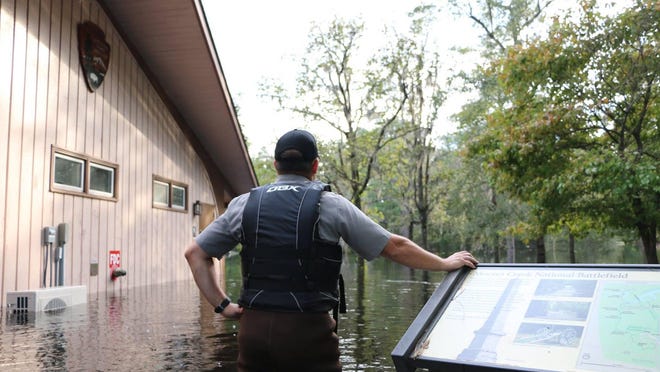 Comparing tree ring width and heavy tropical rainfall amounts for those years allowed the researchers to see what precipitation level resulted in each ring width. Maxwell said the researchers then estimated past annual tropical system rainfalls dating back to the 18th century. What they found was that hurricane rainfall extremes increased each decade, adding up to 2.5 to 5 inches more rainfall today compared to storms from the 1700s, he said

The National Park site is famous as the home of one of the first Patriot victories of the Revolutionary War and the last broadsword charge by Scottish Highlanders, which failed miserably in a world of muskets. But recently the site, one of only two national battlefields in North Carolina, has been dealing with a more insidious foe — repeated flooding events.

Floodwaters from Hurricanes Matthew in 2016 and Florence in 2018 inundated the park, and much of western Pender County. Like the flooding caused by Hurricane Floyd in 1999, those were considered generational extreme weather events.

But the battlefield is now seeing regular flooding from even minor tropical or even non-tropical rain events. The latest came in late May 2020 when a week of heavy downpours across the region dropped up to 10 inches of rain, forcing flooded sections of the park to close for about three weeks just as it was reopening from two months of COVID-19 closures.

"It's gone from being something that's unusual to something that we're going to have to learn to live with," said parks superintendent Matthew Woods.

That sentiment is backed up by a recent research paper that studied growth rings in long-lived longleaf pine trees in North and South Carolina. The study, titled "Recent increases in tropical cyclone precipitation extremes over the U.S. East Coast," was published last month in the Proceedings of the National Academy of Sciences. Dr. Justin Maxwell, lead author of the study and an associate professor of geography at Indiana University, said the study aims to fill a gap in the understanding of how climate change is impacting tropical weather systems.

Every year, trees produce a growth ring that scientists often use to determine the age of that tree. But Maxwell said the rings also respond to weather extremes, such as heavy precipitation events.

“There’s a strong relationship between rainfall and tree growth, and it’s something that’s easy to see in longleaf pines,” he said, noting the trees are very sensitive to precipitation due to their shallow root structure that responds rapidly when heavy rainfalls bring the water table up.

Maxwell and his fellow researchers, which also included several North Carolina-based scientists, took non-invasive core samples from several groves of old longleafs dating back hundreds of years. They included trees from boggy areas, which had allowed them to escape the ax from early European settlers who clear-cut wide swathes of longleaf forest for the naval stores industry, in the Croatan National Forest in Craven County, Holly Shelter Game Land in Pender County, and the Green Swamp Preserve in Brunswick County.