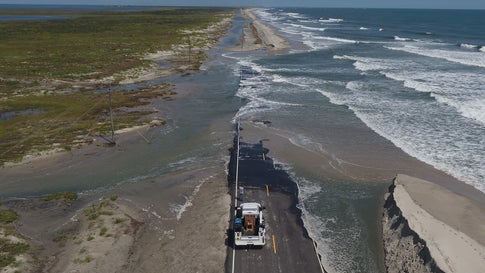 On a warm day in late August this year, Ocracoke looks much like it has for years.

Traffic moves at a crawl through the village business district, the shops are full of people, restaurants are open, and golf carts and bikes seem the best way to get around.

“In general, it’s pretty brisk. And I’ve heard that from other people around the village as well. They’re feeling pretty good about the season,” Amy Howard, owner of the Village Craftsman, said. “All in all, that’s really good news.”

Yet Ocracoke is still a community on the mend from the devastation that Hurricane Dorian wreaked one year ago. Away from the main business district, among streets where only residents go, or along the quaint dirt roads that are still a part of the village, there is still a journey to be traveled.

“It’s just been really a real big challenge, so we’ve come a long way. We’re not fully back, but we’re going to get there,” Paige Bennett said. Bennett was one of a number of island residents who volunteered as caseworkers in the wake of Dorian to help her neighbors get the aid they needed.

On September 1, 2019 Hurricane Dorian made landfall at Elbow Cay in the Bahamas as a category five storm. For three days it lashed the island nation with sustained winds as strong as 185 mph, before beginning its trek to the north.

The path of the storm paralleled the coast, bypassing Florida, Georgia, and South Carolina, finally making landfall on Hatteras Island at 8:35 in the morning on September 6 as a powerful category one hurricane.

As the storm exited over the ocean, it left unprecedented levels of damage in its wake, especially on Ocracoke and Hatteras. But, as is often the case in coastal communities, it was not the wind that did the damage; rather, it was the water, the storm surge that inundated the towns and communities.

And the storm surge was like nothing anyone in those communities had ever experienced — 7 feet, 4 inches in Ocracoke Village, flooding every street, every yard, every property. On Hatteras Island the US Coast Guard gauge recorded a storm surge of 7 feet.