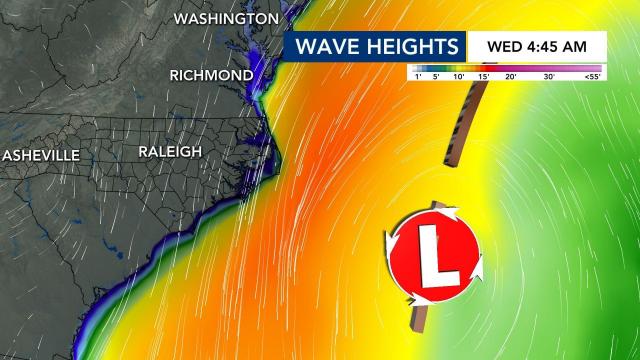 RODANTHE, N.C. — Debris was scattered along the Cape Hatteras Seashore this week after two unoccupied homes collapsed into the ocean.

The homes washed away, and there's concern it could happen again at any minute. Gripping video and images from the Outer Banks showed the power of mother nature. A coastal low brought flood warnings, strong winds and made high tides come further inland.

The homes that collapsed were on Ocean Drive in Rodanthe and less than 100 feet away from each other before they crashed into the surf. In February, a house between Rodanthe and Salvo collapsed.

The state has long championed its coastline for its natural beauty and scenic views, but between factors like rising sea levels, hurricanes and beach erosion, the environment is a valid concern for people trying to build a life there. Waterfront homes and livelihoods are especially vulnerable, as is the area's penchant for attracting tourists.

Dr. Reide Corbett of the Coastal Studies Institute says this kind of erosion is nothing new on the Outer Banks. Beach communities around the world are looking at a future where they'll have to manage the effects of climate change.

"It is happening today," said Corbett. "We see the effects today, we can use that and use the experiences that we have today to try and understand and come up with a plan moving forward to create a more resilient community for us and many communities around the globe."

"I think it speaks to the increased vulnerability of the Outer Banks as a barrier island," said Kevin Zorc, who lived on the Outer Banks for 40 years. "You know, the effects of sea level rise and climate change I think are playing out in a real world scenario."

Wave heights on Wednesday were abnormally high on the coast. WRAL meteorologist Mike Maze said we could see our first hurricane in May, despite the fact that Hurricane season doesn't begin until June 1. Evacuations are common during hurricane season, when residents seek higher ground.