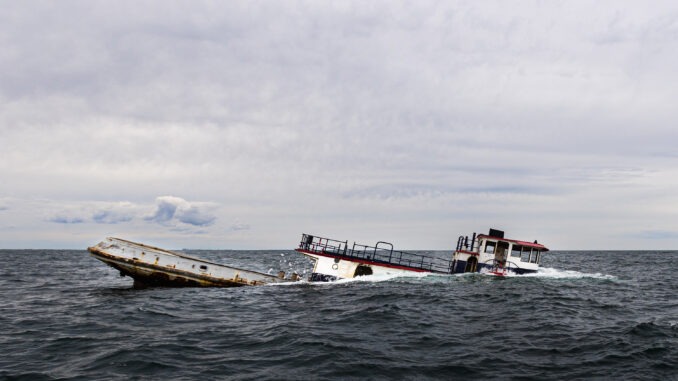 The Valley Forge, a 108-foot firefighting tugboat, was sunk seven miles southeast of Oregon Inlet on May 6, 2021 to become part of AR-165.

The Valley Forge joins two other tugboats, the America, and the American at AR-165. The site, which is located about 7 miles southeast of Oregon Inlet, also contains approximately 7,200 tons of recycled concrete pipe. The site was established, and all materials placed, as part of a Coastal Recreational Fishing License grant awarded to the Oregon Inlet Artificial Reef Committee.

The Valley Forge is a 108-foot firefighting tugboat, originally commissioned by the U.S. Army and constructed in 1954. It served for many decades, undergoing a refit in the 1990s. The tug was later decommissioned and put up for auction in 2012.

The tug was cleaned of environmental pollutants in accordance with Environmental Protection Agency, U.S. Coast Guard, and U.S. Army Corps of Engineers regulations prior to reefing. Its placement leaves a navigational clearance of approximately 20 feet. The division plans to sink some large reef balls and concrete pipe at the site later this year.

An artificial reef is a manmade underwater structure, typically built to promote marine life in areas with a generally featureless bottom. In North Carolina, they serve as crucial spawning and foraging habitat for many commercially and recreationally important fish species.

The division maintains 68 artificial reefs, located from estuarine waters to 38 miles from shore. They are situated so that they can be reached from every maintained inlet in the state.