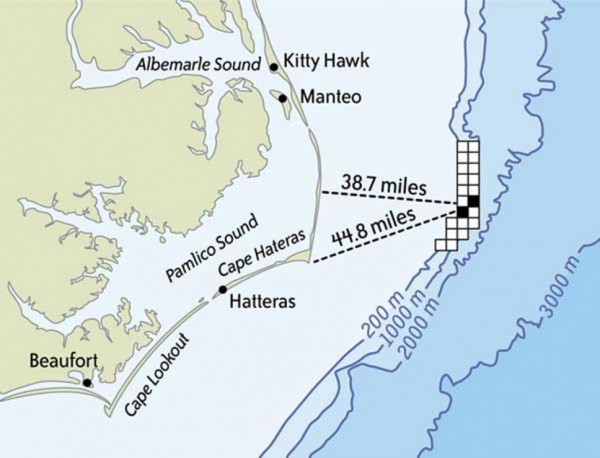 Buffeted by breaking waves and a brisk ocean breeze, the town of Rodanthe balances on a precarious shard of land along the Outer Banks. From here, the eastern-most point in North Carolina, it is less than 45 miles to an expanse of the sea where energy corporations plan to puncture the ocean bed in search of oil and gas.

But first, seismic testing companies must do their reconnaissance. To do so, they deploy a boat towing an array of 24 airguns firing every 10 to 15 seconds for 24 hours each day, as many as 208 days a year. At low frequencies, the sound ping-pongs among the ridges and valleys of the ocean bed, and the returning echo patterns can reveal the locations of the energy deposits.

The sounds also reveal the vulnerability of sea life to human-made intrusions. Scientific studies have shown the sound can injure, kill and deafen marine life, including fish, whales and dolphins — forcing them to flee their habitats and blunting their desire to eat and breed.

Last week, the federal government overruled North Carolina’s objection to seismic testing off the coast, saying the activity proposed by the company WesternGeco is in the national interest. The decision allows the Bureau of Ocean and Energy Management to issue permits for seismic testing on the Atlantic Outer Continental Shelf, roughly from Maryland to Florida. Four more companies have requested permits.