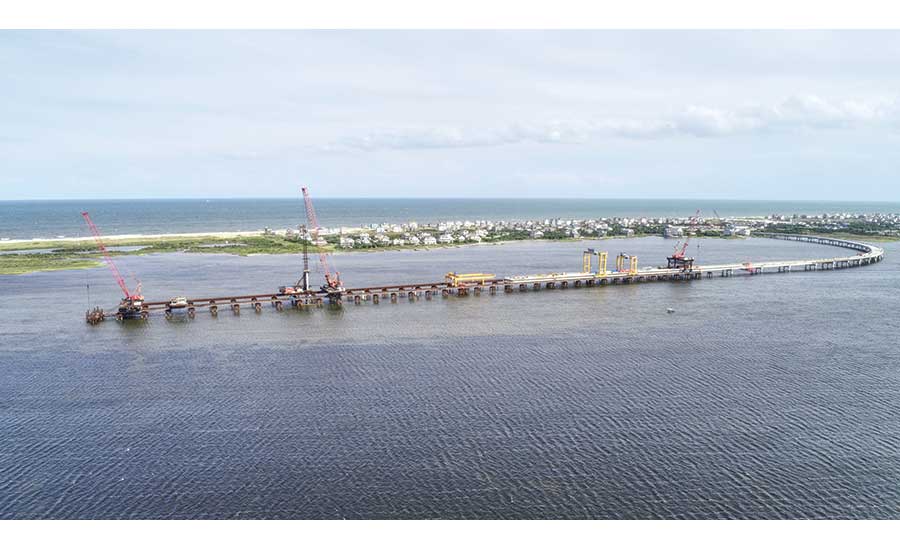 From atop the gantries being used to erect the Rodanthe Bridge in North Carolina’s Pamlico Sound, a worker can look across the sands of windswept Hatteras Island and see Atlantic Ocean waves pounding the shoreline next to the two-lane State Route 12, the sole road connecting a chain of tourism-dependent villages to the mainland.

The view is a reminder of why the North Carolina Dept. of Transportation is spending $145 million to build the 2.4-mile-long elevated road.

The bridge will bypass an area of Route 12 called the S Curves, which in 2011 required a $3-million emergency repair effort to fill and cover a temporary inlet created by Hurricane Irene, and a $20-million U.S. Army Corps of Engineers-funded beach nourishment project the following year. NCDOT monitoring data shows the S Curves’ oceanfront is being eaten away at a rate of 11 ft to 12 ft per year. Forecasts for 2060 indicate that even under low-erosion scenarios, other sections of the 12.5-mile corridor will be similarly vulnerable to encroachment.

NCDOT is not alone in facing the need to adapt coast-hugging infrastructure to a changing environment. According to the US Global Change Research Program’s Fourth National Climate Assessment, global sea levels could rise 1 ft to 4 ft during the 21st century. But while most areas with at-risk infrastructure are aware that adaptation and, in extreme cases, retreat from the shoreline, may be an inescapable outcome, few such projects are actually underway. The reason is not always as simple as lack of funding.

“You can’t just pick up a road and move it,” says Annie Bennett, a senior associate with the Washington, D.C.-based Georgetown Climate Center. “It points to the importance of planning and integrated decision-making.”