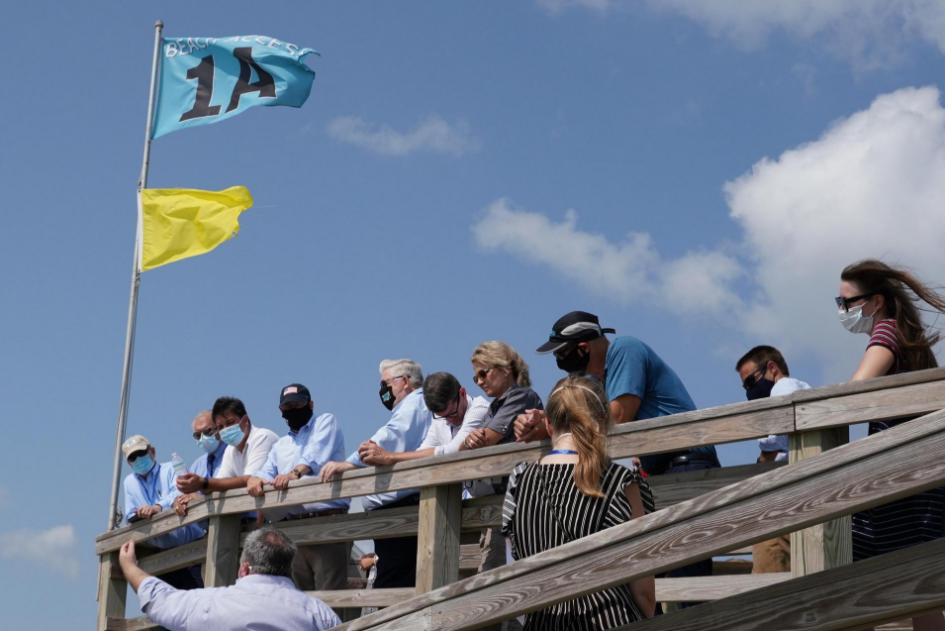 TOPSAIL ISLAND – Each of the towns along Topsail Island have different challenges and needs when it comes to protecting their shoreline, but their meeting Thursday with congressional leaders was about one island.

“It was a great dialogue,” said North Topsail Beach Mayor Joann McDermon. “All three towns work well together and we were all able to discuss our current challenges and progress.”

Congressmen Greg Murphy and David Rouzer visited Topsail Island Thursday to take a look at beach nourishment and shoreline restoration efforts and to talk with representatives from North Topsail Beach, Surf City, and the Town of Topsail Beach as well as Onslow and Pender counties.

At the end of the tour of the beaches, Murphy said one of the biggest issues they discussed is the need to correct errors in the maps under the Coastal Barrier Resources Act (CBRA). North Topsail Beach has been trying to reverse the CBRA designation in several areas of town. Public beaches within a CBRA designated area are not eligible for federal grants or aid, which impacts the town’s resources for funding for shoreline projects.

“Congressman Rouzer and I – our teams – have been working on this issue,” Murphy said.

Murphy said he saw some of the different challenges the towns face in stabilizing their shorelines and re-nourishing the beaches as well as projects such as those at the southern end of Topsail Island, where the Town of Topsail Island has had success in managing its shoreline and reclaiming sand from the inlet to place on the beach.

The projects in each of the towns have the same goal of a stable shoreline for the benefit of the entire island, to protect the environment and support their residents and the local economy.

There are many projects that are a win-win for the cities, the counties and the state so that people can enjoy the beach and the environment can be protected.

Topsail Beach Mayor Steven Smith said the congressmen were able to observe the status of the different areas of shoreline along the island and how each town is different.