Mid-Atlantic
A house in Rodanthe, North Carolina that collapsed into the ocean during a storm, February 2022. CAPE HATTERAS NATIONAL SEASHORE 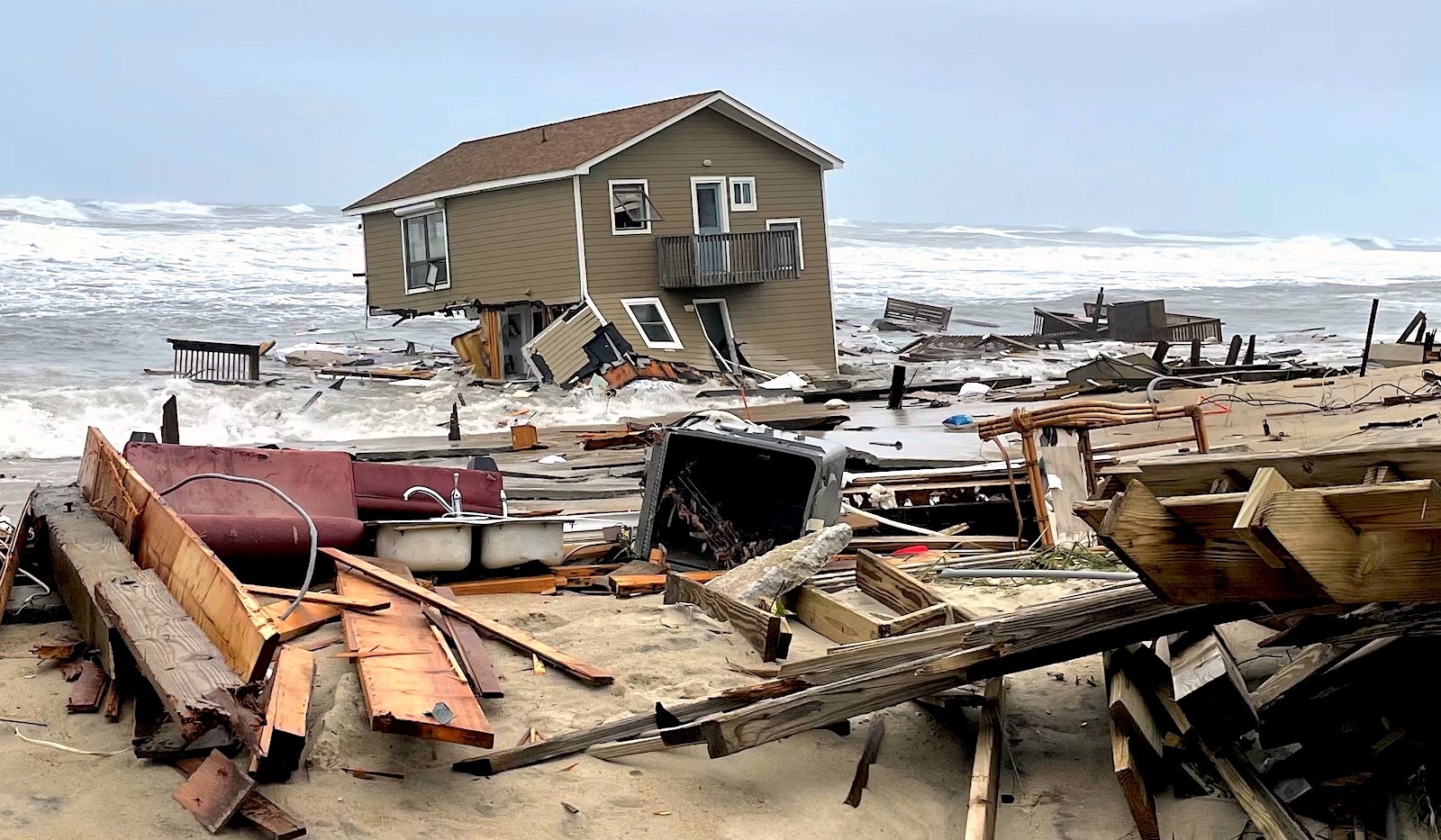 Despite the risks of building on barrier islands, developers kept constructing homes on North Carolina’s Outer Banks. Now, as sea level rises and storms become more frequent and powerful, the famed vacation spot is fighting an increasingly difficult battle to keep from washing away.

Rounding the corner near the village of Rodanthe, there is a stretch of highway known as the S-Curves because of its twisting loops and turns. It is, by almost any measure, one of the most vulnerable sections of roadway in North Carolina, if not the nation. Years ago, highway officials erected a massive dike here with 2,200 sandbags — each bag was 15 feet long, two feet tall, and five feet wide — and then buried the dike in even more sand in an effort to keep the ocean at bay and the highway, known as NC 12, open.

It didn’t work, or at least it didn’t work as hoped. The Atlantic Ocean continued to pummel the towering artificial dune, crashing over the top, tearing apart sandbags, and flooding the highway — closing the only access on and off of the lower Outer Banks for days and sometimes weeks.

Following each storm, the North Carolina Department of Transportation (DOT) sent in bulldozers and graders to rebuild the sand dike and patch the road, only to watch the next storm undo its work. “It’s like the Siege of Troy,” said local biologist Mike Bryant. “It just goes on and on.”

Bryant managed the nearby Pea Island National Wildlife Refuge — a sprawling, 13-mile-long sanctuary that attracts tundra swans, Canadian geese, and 400 other species of migrating birds for two decades. He estimated that he spent 60 percent of his time on NC 12, including issuing permits to state and federal engineers to repair storm damage and severely eroding sand dunes. “It felt exhausting at times,” he said.

In one sense, NC 12 stands as a metaphor for the dangers of building anything on a highly dynamic, constantly-shifting barrier island, especially one that has lost hundreds of feet of shoreline in places over the last century and now faces even-larger threats from sea level rise and more frequent and powerful storms related to climate change. The risks aren’t limited to the Outer Banks, of course. Nationally, U.S. coastal resorts from Cape Cod to Miami to Galveston face unprecedented and costly challenges as their shorelines narrow and floodwaters inch ever-closer to millions of houses, condominiums, and hotels — over one trillion-dollars-worth of property in all.

Still, nowhere are the threats more visible than along the famed Outer Banks of North Carolina, where each summer a flotilla of SUVs deliver eager vacationers, swelling the population nearly tenfold, to over 300,000, while also fueling a tourist economy that supports thousands of jobs and generates millions in tax revenues for local governments.

Nearly four decades ago, the University of Virginia coastal geologist Robert Dolan, a long-time researcher of barrier islands, wrote that the Outer Banks are “one of the highest natural-hazard risk zones along the entire Eastern Seaboard of the United States.” He cited the Banks’ unique geography and risky exposure to storms, volatile currents, and percussive winds.

The Geography of Risk with Pulitzer Prize Winner Gilbert Gaul

Why do we continue to repeat coastal development mistakes?

On this rebroadcast of the Ship to Shore podcast from May 2019, host Robert Frump is joined by Gilbert M. Gaul to discuss his (then) new book, The Geography of Risk, Epic Storms, Rising Seas, and the Cost of America's Coasts.  Gaul reveals what he characterizes as the confounding array of federal subsidies, tax breaks, low-interest loans, grants, and government flood insurance that shift the risk of life at the beach from private investors to public taxpayers, radically distorting common notions of risk. Gaul argues that these federal incentives have resulted in one of the worst planning failures in American history, and the costs to taxpayers are reaching unsustainable levels.

Gaul twice won the Pulitzer Prize and has been short-listed for the Pulitzer four other times. For more than thirty-five years, he worked as an investigative journalist for The Washington Post, the Philadelphia Inquirer, and other newspapers. He is the author of three previous books and lives in New Jersey.