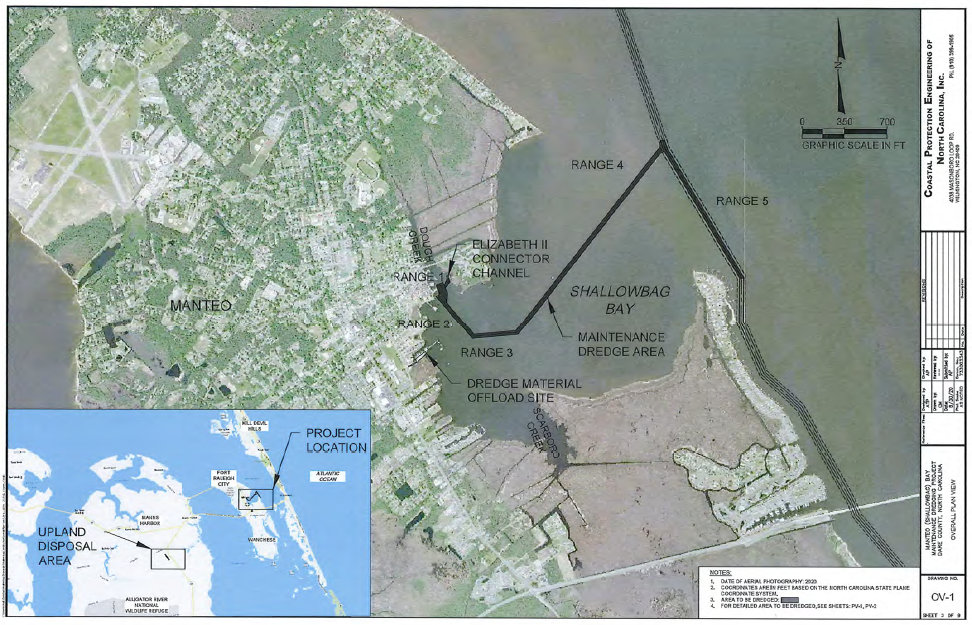 A three-month dredging project to deepen and widen the channels within Shallowbag Bay and Roanoke Sound in Manteo has been completed.

The project by Salmons Dredging Inc. began at the end of November 2020 and was completed at the end of February. The 90-day project opened up the waterways, allowing vessels to navigate previously unnavigable waters due to shoaling, including the Elizabeth II, a replica 16th century sailing ship that has been docked at Roanoke Island Festival Park.

Dare County Board of Commissioners unanimously approved Nov. 16, 2020, a contract and grant application for maintenance dredging within Ranges 1-5 of the Manteo Federal Navigation Project, about 2.2 miles within Shallowbag Bay and Roanoke Sound. A connector channel that extends 290 feet from the northern terminus of Range 1 to the berth of the Elizabeth II was also dredged.

The dredging project deepened the channel from its previous depths of 1-5 feet and 6-7 feet to the 9-foot depth that is required in order to allow larger vessels to safely navigate the waterway. The channel was also widened to 50 feet.

Another goal of the project was to make it possible for the Elizabeth II to leave its port at Roanoke Island Festival Park for maintenance.

Due to shoaling in the channel, the Elizabeth II had not been able to sail out of its port since 2017. The replica ship was built by hand and dedicated during a 1984 ceremony as part of the 400th anniversary celebration of the Roanoke voyages from England to the New World.