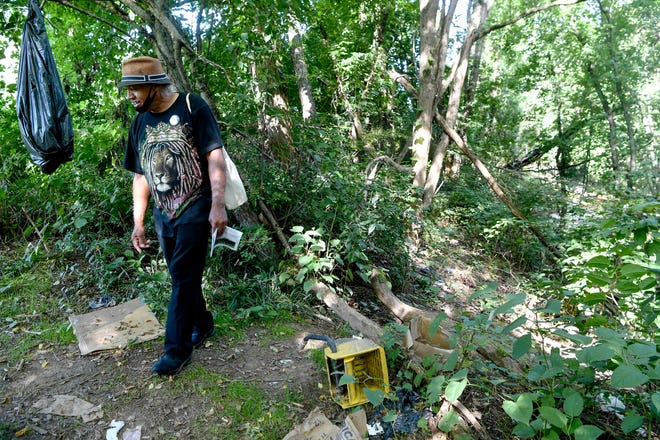 If Roy Harris could give his humble opinion in how Asheville should start its monumental attempt at reparations, he would say to start at the historically Black Southside neighborhood and clean up a stream known as Nasty Branch.

Harris, 70, who has lived on Bartlett Street, a couple of blocks from the stream, for more than 30 years, said the area was ripped from its roots during urban renewal, robbed of its history and identity, and the streams once lined with homes and businesses, where children played and searched for tadpoles, were left by the city to rot with pollution.

In July, City Council voted to provide reparations to Black residents in return for the wrongs done to them dating back to slavery, Jim Crow, segregation and urban renewal, to current disparities in income, health, education and more.

“Southside is one of the most gentrified places in Asheville, and in the world,” said Harris, of the practice of wealthy people taking over a formerly disenfranchised area.

He walks every day along the stream officially called Town Branch, but known locally as Nasty Branch, filled with trash and homeless camp remnants, and lined with sanitary sewers that sometimes overflow, where it runs behind the Dr. Wesley Grant Sr. Southside Center, on a never-completed and now kudzu-covered greenway.

“Racial equity, reparations, climate equity, social issues, all of that is tied to this watershed plan, 60-70 years after urban renewal,” he said.

This was a time, starting in the 1950s, when the city tore down hundreds of homes and businesses that were deemed uninhabitable and the Black people who lived there were forced into public housing projects.

The plan to start to repair some of these wrongs that Harris referenced is the Central Asheville Watershed Restoration Plan. Just released last week, the plan is the result of a year-long study by RiverLink, in conjunction with the city, of water quality issues in the Central Asheville area.